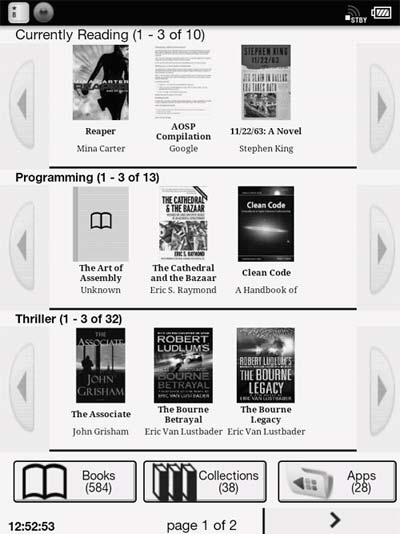 One of the annoying things about the Sony PRS-T1 is the homescreen isn’t customizable. It always insists on showing the last three ebooks you added to the Reader. Who cares about recently added titles? A list of recently read titles would make more sense. Luckily, there’s a fix for that.

A crafty developer named “mrspaceman” has created a new homescreen for the Sony PRS-T1 that lists your ten recently read titles with a carousel to scroll through them. It also shows collections on the homescreen and you can even specify which collections to show.

Another benefit is that it adds a section for apps so that you can easily jump to your app drawer without having to open a separate launcher. The library view has been revamped as well. Books are sorted by title with a list of letters along the left side for sorting by letter.

The second page of the homescreen is still there too, but aside from the web browser links, the other features don’t work—the Reader Store link, and the reference and multimedia sections—so you have to jump back to the original homescreen to access them.

I was bored so I re-rooted my Sony PRS-T1 to test the new homescreen out (it literally took 2 minutes). I’m really liking the new homescreen; it’s a keeper. And a couple of details that annoyed my about the rooted PRS-T1 in the past have been fixed, such as using the page buttons to scroll when using the web browser.

Here’s how to install the alternate homescreen on the Sony PRS-T1:

The new Sony PRS-T1 homescreen is currently a work in progress. Hit the via and source links below to provide feedback and to find more information and pictures about the project.