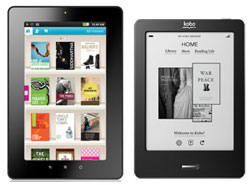 It’s been a busy week of updates for Kobo. They issued firmware updates for the Kobo Vox, Kobo Touch, and their desktop software too.

First, let’s go over the Kobo Vox update. Mine updated automatically but if for some reason yours doesn’t go to Settings, then About Kobo eReader, and hit System Update.

Here’s the improvements with the Kobo Vox update:

Here’s the new features added to the Vox after the update:

Dictionary: With the new dictionary feature you will be able to look up a word or a phrase right from the eBook.

New Shelf Backgrounds: Now your Kobo book shelf can be just as stylish as your Kobo Vox, with many sleek styles to choose from.

The Kobo Touch update, version 1.9.16, adds a new homescreen with a section for recommended reading at the bottom and some new icons and settings from the menu. The update also improves page turn speed and search, plus adds crisper and sharper text.

Here’s the full list of changes for the Kobo Touch:

To update your Kobo Touch, just turn it on and make sure Wi-Fi is connected. Tap the sync button and it will download and install the update.