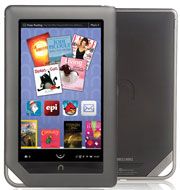 I noticed this morning that Barnes and Noble is selling the Nook Color for $179 from their eBay store.

They usually sell refurbished units on eBay but this is a brand new Nook Color. The refurbished Nooks are selling for $149. Since it is new, you’d think they would offer the same sale price at B&N.com, but they don’t. It is still $199 from there.

If you missed out on an Android tablet/color ereader for Christmas, now would be a good time to pull the trigger because you’re not going to find a better tablet for under $180. But then again you can get a Kindle Fire for $199 so maybe it’s not that great of a deal after all—personally I’d pay $20 more for the Fire, but I don’t need memory expansion.

Compared to the Nook Tablet, which is selling for $70 more, a $179 Nook Color is a really good deal since both devices are pretty much identical from a software standpoint. The Nook Tablet is faster with better hardware, but the Nook Color has the benefit of running ROMs since it isn’t locked down from Android development.

I imagine B&N will look to thin stock of the Nook Color over the next month or two before they stop selling it entirely to bring more focus on the Nook Tablet. If you hold out another couple months it will probably be even cheaper. I just don’t see it competing that well at $199 up against the Kindle Fire with the only real benefit being the memory card slot.