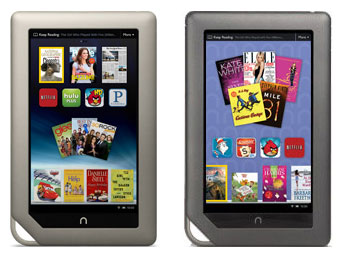 Now is a good time for a Nook Tablet vs Nook Color comparison review since Barnes and Noble issued a firmware update for the Nook Color to add some new features earlier in the week.

Even before the new firmware it was pretty hard to tell the Nook Tablet and Nook Color apart, and now they are practically identical twins from a software standpoint. I bet the average person would have trouble pointing out many differences after 5 minutes of use on each.

Both are exactly the same shape and size. For the most part both have the same user interface, menus, library, book store, apps, and features. Both run B&N’s forked version of Android, and both can be rooted to install the Android Market and Google apps.

Both play videos and support Adobe Flash and Netflix. They have the same exact ereading apps with all the same ebooks and periodicals and ereading features, the one exception is the Nook Tablet has a microphone and can record personalized readings for certain children’s books.

The most noticeable differences between them comes in the form of hardware upgrades for the Nook Tablet.

Where the Nook Tablet Wins

The biggest change is the added speed. The Nook Tablet operates a lot faster and smoother than the Nook Color, with no lag or stuttering thanks to the dual-core 1GHz processor and 1GB of RAM. Streaming video from Netflix and Flash video online is smoother. Videos games, even 3D video games, play without a hitch. The web browser is a lot zippier, especially zooming and scrolling.

Aside from the speed, the next most noticeable difference between the Nook Tablet and the Nook Color is the screen. The Nook Tablet’s screen isn’t as bright, colors are just as bright and vibrant, but it doesn’t emit as much light, the whites are more subdued rather than blazing white. This is most noticeable when reading an ebook. The background color on the Nook Tablet is darker, with more of a tan tinge than white like the Nook Color. I find it more pleasant because it is easier on the eyes.

More apps. The Nook Tablet has access to some additional apps such as Hulu+. The Nook Tablet also has a loophole that lets you install non-B&N apps without a hack. This is a big bonus because you can access the sideloaded apps easily with a separate Android launcher without sacrificing any of the Nook’s features. But you never know, B&N might close the loophole with a firmware update.

The Nook Tablet has twice as much storage space at 16GB than the Nook Color. The problem, though, is there’s only 1GB of space partitioned for user-added content (you can still use a memory card, obviously). It also has twice as much RAM.

Lastly, the Nook Tablet is noticeably lighter than the Nook Color, 1.7 ounces lighter in fact.

Where the Nook Color Wins

The biggest advantage the Nook Color has over the Nook Tablet is the price. The latter sits at $249 plus tax from Barnes and Noble

The Nook Color has the edge in Android development, meaning it is more open to rooting and hacking and running custom ROMs off a memory card. See CM7 tutorial and N2A cards. It will likely be getting a ROM for Android 4.0 soon as well. The Nook Tablet on the other hand has a signed bootloader, meaning it is more locked down and hacking is a lot more difficult.

You can take a Nook Color to a B&N store to get it re-partitioned if you want to increase the 1GB user space; the Nook Tablet doesn’t have this option, at least not yet.

The bottom line is this: from an ereading perspective they are identical. So if all you want is a color ereader with some extras then you might as well save your money and go with the Nook Color.

If you need better performance and speed for playing video games, smoother web browsing and video playback, better battery life and faster all around operation, go with the Nook Tablet. It can handle advanced tasks better because of the dual-core processor.

The Nook Color can handle these tasks somewhat, but advanced video games aren’t going to run smoothly, online video and Netflix is going to be more choppy at times, and the device is generally laggier and slower all around. It’s still the best option for under $150, though.