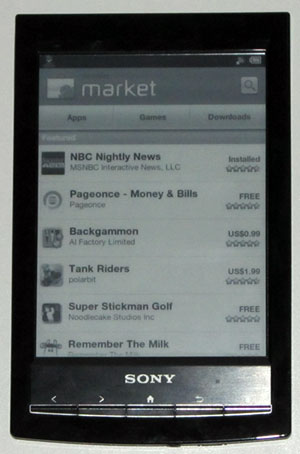 If you’ve got a rooted Sony Reader PRS-T1 in hand, you can now add the Android Market to it in just a few minutes. And if your Sony PRS-T1 isn’t rooted yet, that takes just a few quick minutes as well, if you’ve got the need for it.

I just tested this out, and even though I think adding the Android Market to the PRS-T1 is somewhat superfluous at this point since its app storage space is so limited, it does seem to work as advertised. I was able to successfully download and install a couple of apps without a problem.

The directions for adding the Android Market were recently posted over on the Sony PRS-T1 rooting wiki.

I followed the directions and it didn’t work the first time I tried it; the Market just kept force-closing whenever opened. That was with the Google_Market.zip package. I then uninstalled the two apps and started over with the Android Market.zip package and it worked.

Here’s how to install the Android Market on the PRS-T1; do this at your own risk:

Note: the directions on the wiki say to ensure that “Background data” and “Auto-sync” are enabled in Settings > Accounts & Sync before running the Android Market. Mine were already enabled by default so unless you changed it yours probably are too.

There are a couple of known issues listed: 1) some apps refuse to download, and 2) all apps must be installed to the internal memory only.

Once someone figures out how to get apps to install on an external memory card, a rooted PRS-T1 will become a lot more useful. Right now the amount of space available only affords enough room for a handful of apps. Nevertheless, it’s nice to have the Android Market on the Sony PRS-T1 for easy access to the widest selection of apps, which means lots of reading apps, news apps, and helpful tools and utilities.

Update: It turns out there is a workaround to increase the space for apps by resizing the data partition.