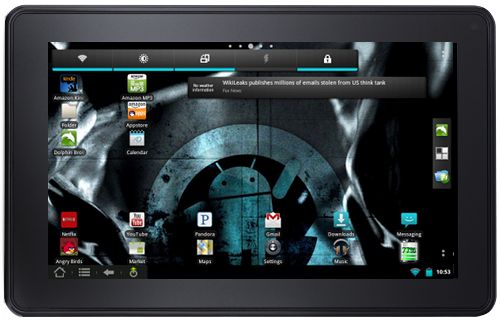 CynangonMod is aftermarket software for Android phones and tablets, including the Kindle Fire. Developers have been hacking the Kindle Fire since day one so it’s not surprising to see CM7 running on Amazon’s first tablet.

By installing CM7 on the Kindle Fire you can get more of a true Android Tablet feel by shedding Amazon’s operating system entirely. You can install different homescreen launchers, wallpapers, widgets, etc. It also opens up the ability to install the Android Market and Google apps for the full Android tablet experience.

Of course you can keep the stock Kindle interface and still have the Android Market and some Google apps simply by rooting the Kindle. One thing I noticed, however, is that not as many apps show up in the Market that way; on CM7 more apps are showing up for some reason.

Should I Install CM7 on my Kindle Fire?

If you like your Kindle Fire but are sick of Amazon’s limited interface and want more customization, openness, and access to the Android Market and Google apps, and have already tried rooting, then you should give CynanogenMod 7 a test drive.

Normally I would recommend CM9 over CM7 because CM9 is based on Android 4.0 and offers a new interface and a bunch of new features and improvements, but right now (the end of February), CM7 is more polished than CM9.

CM7 is smoother and less buggy for the Kindle Fire at this point in time. Everything seems to be working well. CM9 still needs a little more time to develop, especially since hardware video acceleration doesn’t work yet, meaning videos and games are limited.

Here are some pros and cons that I’ve noticed with running CM7 on the Kindle versus the stock operating system.

What you Gain by Installing CM7 on the Kindle Fire

What you Lose by Installing CM7 on the Kindle Fire

How to Install CM7 on the Kindle Fire

Installing custom ROMs on the Kindle Fire is a simple task once you’ve rooted it and installed TWRP Recovery.

Here’s the thread at XDA to download CM7 as well as the Google apps package for the Kindle Fire.