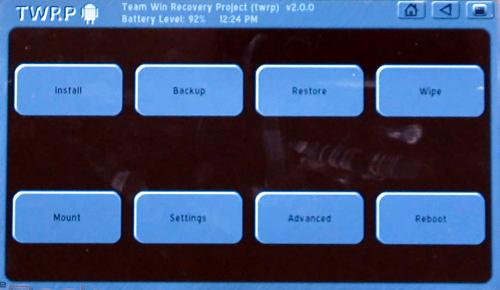 This article will show you how to install and use TWRP Recovery on the Kindle Fire to flash custom ROMs on it to transform it into a completely new tablet with different builds of Android—CM7, aka Cyanogenmod 7, for Android 2.3.4 or CM9 for Android 4.0, MIUI, Android 4.1 Jelly Bean, and various other ROMs.

Among other things, you can also use TWRP Recovery to backup ROMs and backup your Kindle so that it can be restored to exactly how it was before installing ROMs. It sounds complicated at first but after you do it a few times it becomes really easy.

1. The first step to modding your Kindle Fire is to root it, which will give you access to files not normally accessible to the user. Rooting is extremely easy thanks to a tool created by Android developers called the Kindle Fire Utility. Just follow the Kindle Fire rooting guide and you’ll be ready for the next step in a matter of minutes.

Update: I rooted my Kindle Fire before doing any of this but I’ve heard that if you just want to install ROMs, you can use the Kindle Fire Utility to install FireFireFire (FFF) and TWRP Recovery without rooting.

2. To install FFF and TWRP, all you have to do is plug your Kindle into your computer and then fire up the Kindle Fire Utility tool by double-clicking the run.bat file. Make sure the drivers are working properly by confirming ADB status is online. If not, you may need to re-install the drivers again (described in the rooting guide above).

3. With KFU, installing FFF and then TWRP Recovery is a simple matter of choosing a number and then hitting enter. This is an easy but very important step. Just make sure to follow the directions on-screen very carefully and everything will go smoothly. The Kindle Fire Utility will automatically download the latest version of FFF and TWRP Recovery and activate Fastboot (4002). Some different screens will flash on your Kindle Fire and at one point you’ll be asked to press a button to reboot.

The Kindle Fire Utility will tell you when the process is complete. Then you can close KFU and unplug the Kindle Fire from your computer to move on to the next step.

So TWRP Recovery is Installed, Now What?

How to open TWRP Recovery:

Then a Team Win logo will appear and you’ll be greeted with a screen that looks somewhat like the one at the top of this page.

Update: Since this tutorial was written, TWRP Recovery has been updated and is a little different now. For one, it use to show a yellow triangle at boot up and you had to hold the power button to launch TWRP. Now it appears that you have to install FFF to launch TWRP. Also, the TWRP menu system has changed slightly from the video and directions below, but it’s all still basically the same.

The first thing you are going to want to do is create a backup of your Kindle Fire in its current state so that you can restore it using TWRP at any time in the future. You can view your list of backups and apply them from the Restore menu in TWRP.

You can go in and create backups anytime, even of ROMs if you want to save their current state before switching to another ROM.

The Kindle Fire has a small amount of internal memory, however, so remember to keep an eye on it. Backups aren’t small. At some point you’re going to need to delete some or move them off the Kindle. They get saved to in the TWRP folder on the internal SD card.

How To Install ROMs on Kindle Fire

One of the cool things TWRP can do is install ROMs, which essentially turns your Kindle Fire into a completely new tablet and does away with Amazon’s operating system entirely.