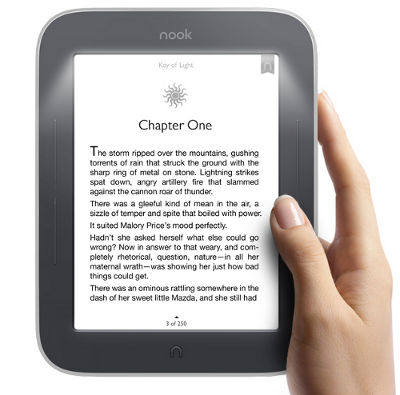 Editor’s Note: This first impressions review of the Nook Touch with GlowLight (dubbed NookGL) was submitted by Cloudmann in the comments section of an earlier post. It’s kind of hidden over there so I thought I’d give it a post of its own since it is well-written and informative. Plus this gives everyone a good place to discuss the new Nook as it starts arriving at our doors. Thanks for the review, Cloudmann!

Just got mine in today. For sanity’s sake, I’ll call it the NookGL. The GL is the same ole NST (albeit with firmware 1.1.5… whether this does more than just support the glowlight, I’m not sure). The software, reading, etc. are all the same. Here’s what I noticed.

1) Obviously, the NookGL has seen the light! The glowlight works great. At 20-25 percent, the screen is lit WELL and is very readable. There’s a bit of LED bleeding at the top of the screen, but it doesn’t detract from reading at all. The software and UI have been updated to allow for the light interfacing. The manuals have been updated, too.

2) You wouldn’t know it picking the two models up individually, but when holding the NST and NookGL side by side in either hand, and swapping them, the half-ounce weight difference is noticeable. Not life changing, but definitely there. The NookGL seems to balance in one hand a bit more comfortably, too.

3) The back of the NookGL seems to feel a bit smoother, but more matte than the NST. The texture is a bit different. It feels a bit more “velvety” for lack of a better word. Works out great.

Other than that, it’s the same ole hat. Worth the $130? Yup! The light just makes for a really complete product. If only this thing supported audio…

Haven’t tried to root it. This one’s my wife’s. If I get another, I’ll try to root it out and see if touchnooter is compatible. Might be…

A little more to add, since I’ve had this for more than a couple of hours, now. The NookGL seems (to me, at least) to charge a bit quicker than the NST. It came out of the box with a 52% charge. I poked around with it a bit, played with the light for a while, and got it down to 30%… took a bit of time, though. It charged to 100% in about an hour and 15 minutes. Not too shabby. Newer battery, perhaps? Better charging/discharging algorithms? Who knows?

Wifi roughly doubles battery usage, as does the light (at full blast). Both on all the time QUADRUPLE the usage. Still, this thing goes a long way. Just turn Wifi off while not using it, ditto for the light, and voila, same ole gas sipping Nook as before.

Also, playing around with it a bit (again, this could be just me), the screen seems a tad more responsive. Tough to explain other than to say things just seem a bit more snappy while navigating, page turning, typing, etc., but just a LITTLE bit. Whether this is a hardware or software update, or just my imagination, I’m not sure. Anyone else experienced this?

I LOVE this thing, but find myself wishing it had audio book support (and therefore sound capability), even if only through a headphone jack. Also, it would have been nice to see one of the LG plastic XGA (1024×768) screens in this thing, not just for the extra 60% increase in resolution, but for the durability of the plastic itself. An update to gingerbread would’ve been a nice extra tidbit for rooters everywhere, too. Oh well, can’t really hope for the moon and expect it.

Don’t get me wrong, this thing ROCKS and is the best eink solution right now, only seconded by the NST. Here’s to more and better future B&N products, and more and better competition to raise the bar further. B&N just threw down the gauntlet.