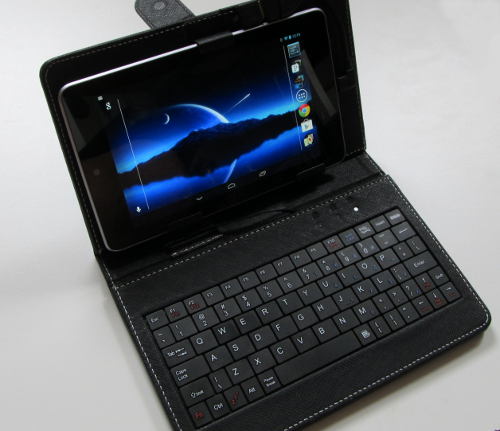 A while back I reviewed a keyboard case for 7″ tablets from Idolian. The case had some flaws but the stand and keyboard are quite useful on occasion and since the cases are so cheap (less than $9 on Amazon), I decided to get one for my Google Nexus 7 tablet since it supports connecting external keyboards.

As you can see in the video below, the adapter is situated so it wraps around the top right edge of the Nexus 7 in the case. It protrudes a little outside the case that way, but I’ve found this is the best setup to make everything work. You can tuck the excess cable behind the Nexus 7 and the power button and volume buttons are easily accessible on the top left corner.

If you flip the Nexus around so the plug is on the left side, there’s not enough room for the adapter between the bottom of the Nexus 7 and the spine of the case to easily close the cover. It works but it’s more clunky and the excess cable is annoying. Plus it’s hard to hit the power button and volume buttons because they are too close to the spine.

The Nexus 7 is very thin so I was wondering how well it would fit in the tabs that hold the device in place. At first it was really loose and didn’t think it would work, but then I bent the tabs down a bit and now it fits snug and tight. And it’s easy to remove from the case because the top tab is spring loaded and slides up.

Overall I like this keyboard case with the Nexus 7, especially since I’m so used to using the Asus Transformer with a keyboard dock. It’s not nearly as useful as the Transformer’s keyboard because it doesn’t have a trackpad for using an on-screen mouse, and it doesn’t have any of the Android-specific buttons so you still have to use the touchscreen for a lot of navigating and interaction, but the keyboard does make typing documents and emails a lot easier, the arrow buttons are handy for scrolling and turning pages, and the stand setup is really nice for using the Nexus 7 hands-free at a table or desk.

One problem that I’ve encountered is the Nexus 7 frequently crashes and restarts if you plug in or unplug the keyboard while the Nexus 7 is in sleep mode. I haven’t had any issues when the device is turned on.

One last thing, the Nexus 7 doesn’t support landscape mode on the homescreen, and that’s really annoying when using a keyboard case like this. I installed Ultimate Rotation Control to fix that problem. Another option would be to use a different homescreen launcher.

I won’t get into anymore of the specifics of the case since I already went over that in the earlier review. But I decided to put together a quick video review to show how the keyboard works with the Nexus 7.