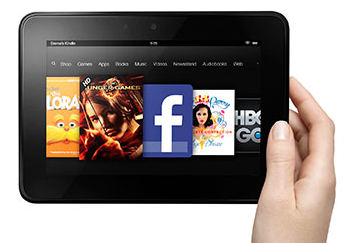 The 7″ Kindle Fire HD started arriving at customer’s doorsteps yesterday morning, mine included, so I’ve had over 24 hours to set it up and start testing everything out. I wanted to write down some first impressions and then I’ll post a video walkthrough and a tips and tricks article in the next couple of days, along with a comparison review of the Kindle Fire HD vs the Google Nexus 7 (now that’s a tough battle right there; both have desirable features the other does not).

Speaking of the Nexus 7, the first thing that struck me about the Kindle Fire HD is how much bigger it is than Google’s tablet. The screen dimensions are the exact same and both devices are the same length, but the Kindle Fire HD is about 3/4" wider. The benefit of this is there’s more thumb real estate so it’s easier to hold, especially in portrait mode, but the Nexus 7 is certainly a lot more pocketable.

The upgraded higher resolution screen on the Kindle Fire HD is definitely its strong point. Text is super crisp and clear. Whites have sort of a tannish hue and aren’t as bright as the original Kindle Fire—probably the polarizing filter—but the clarity of the screen is really, really good, even at sharp angles. The screen certainly makes the Kindle Fire HD one of the better tablets for reading.

The overall design of the Kindle Fire HD is pretty solid. It doesn’t seem quite as high quality as the Nexus 7 but it’s not far behind. It has a soft coating on the back, with a plastic strip that goes all the way across for the dual speakers. The speakers are actually really good, and are among the loudest I’ve heard on a tablet.

One of the main advantages the Kindle Fire HD has over the Nexus 7 and other similar tablets is the fact it has a micro HDMI port for connecting to a TV. I tested it out and it worked well and videos looked good, although it doesn’t quite fit movies to the screen. There’s a small black bar around all four edges. With my Asus Transformer Infinity movies get scaled to the screen perfectly.

For the most part the user interface is the same as the original Kindle Fire. There are some layout changes and some new features but one core thing remains the same: the Kindle Fire HD is a portal to shop at Amazon.com.

All the content sections lead to Amazon, and as if that’s not enough, it has advertisements on the lock-screen and there’s a new section at the bottom of the homescreen that constantly lists related products, which only appears in portrait mode. Luckily you can opt of ads by paying Amazon $15. The lock-screen ads don’t bother me, but all day yesterday there was an ad at the bottom left corner of the homescreen that said "Read Harry Potter ebooks for free with Amazon Prime". I accidentally pressed that stupid thing at least six times. Today it’s gone and nothing has taken its place. If it comes back I’ll be paying Amazon $15 to get rid of it. Seems kind of ridiculous.

And that’s not the only hidden cost. Amazon skimped out on including an AC charger. That is seriously lame. You can use the included USB cable to charge the Kindle Fire from a computer but it’s going to take 13.5 hours by Amazon’s own admission. The AC charger sells for $20 separately, or $10 when purchased with a Kindle Fire HD. Luckily the charger from the original Kindle Fire works fine so I’m using it.

The single most disappointing thing about the new Kindle Fire HD for me is the fact that it is so utterly locked into Amazon’s ecosystem. It can still install 3rd party apps from outside of Amazon, but this time around Amazon isn’t letting us install alternate homescreen launchers to get rid of Amazon’s carrousel. The original Kindle Fire could install Go Launcher to get access to a more traditional Android homescreen that allows for widgets and more customization.

I’ve tried installing about 10 different launchers on the Kindle Fire HD and all install but none work. Worse, it looks like the new Kindles have locked bootloaders so that will majorly hinder development. I was able to install Android 4.1 Jelly Bean on the original Kindle Fire, but that doesn’t look like it’s going to be hitting the HD models anytime soon.

It will take more extended use before I post the full review for the Kindle Fire HD, but one thing is already clear: As long as you don’t mind being locked into Amazon’s ecosystem, the Kindle Fire HD is a nice tablet for the money. If you like to have free range where you buy digital content and want a customizable user interface this isn’t the tablet to get.