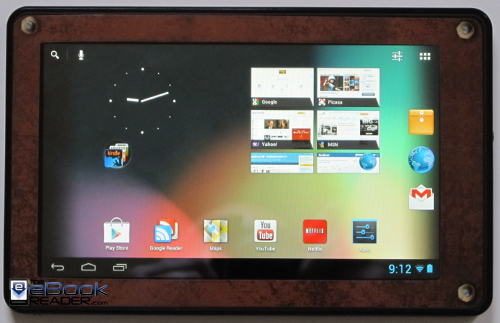 For this review I’m going to show Android 4.1 Jelly Bean on the Kindle Fire and outline everything you need to know to install Android 4.1 on your Kindle Fire.

Since Google released the source code for Android 4.1 last week, Android developers have been working hard to get Google’s latest mobile operating system up and running on various devices, and the Kindle Fire was one of the first to get a Jelly Bean ROM—and it’s very impressive.

In the past I’ve posted tutorials about how to install CM7 for Android 2.3 and CM9 for Android 4.0 on the Kindle Fire. But the Android 4.1 ROM is the by far the best in my opinion. It runs surprisingly well for just being released a few days ago, everything is buttery smooth and most things work well, including HD Netflix and YouTube.

When it comes right down to it, Android 4.1 isn’t very different from Android 4.0—it doesn’t really seem like enough has changed to warrant calling it a goofy new name like Jelly Bean—but Google did a lot of behind the scenes performance enhancements that make Android 4.1 seem a lot smoother and zippier than previous versions of Android.

The web browser is noticeably faster, so is the Google Maps app, transitions are smoother. It’s all around a better Android tablet experience and it runs great on the Kindle Fire.

The only real negative with Android 4.1 is that Adobe has decided to ditch mobile Flash support altogether so Flash video doesn’t work (it never worked very well anyway). It doesn’t even show up in the Android Market. I tried downloading it elsewhere to see if it would work and it would not.

The other thing to be aware of when switching from the stock Kindle Fire software is you won’t be able to access Amazon’s videos with Android 4.1. You can install the Amazon appstore, the Kindle app, and Amazon’s MP3 app, but Amazon doesn’t have a video app for some reason so that’s out the window.

How to Install Android 4.1 on Kindle Fire

Installing Android 4.1 on the Kindle Fire is a surprisingly simple process. I used to think the Kindle had to be rooted to install ROMs but I’ve recently heard that you don’t even have to do that (I’m still not 100% sure though so let me know). You just need to install FireFireFire and TWRP Recovery, which takes all of about 5 minutes. So here we go…

1. Download the latest Android 4.1 Jelly Bean ROM and the Google apps package (Gapps) that goes along with it. There are currently two different Jelly Bean ROMs at XDA, one uses a phone interface and the other a tablet interface. I used the tablet one for this review.

Place the ROM and Gapps ZIP files onto the Kindle Drive either with a USB cable or just download them directly with the Kindle Fire.

2. Plug your Kindle Fire into your computer with a USB cable to enter USB mode. Download the Kindle Fire Utility to your computer and extract the ZIP file. The Kindle Fire rooting guide explains how to use KFU and how to setup drivers. The weird thing is I’m using a new computer from when I initially rooted my Kindle Fire and the drivers were already working so I didn’t have to do anything. The main goal here is to get KFU to recognize your Kindle so it says ADB Status Online.

3. Once ADB Status is Online, all you have to do is hit the number for FireFireFire and hit enter. Then after that’s done do the same thing with TWRP Recovery. Some code will show on the KFU screen and it will tell you to hit a button—it’s all self-explanatory.

4. Now that you have FFF and TWRP installed, your Kindle Fire should show a blue logo upon boot up where you can hold the power button to to bring up booting options.

5. Head over to the TWRP Recovery guide to learn how to use TWRP to create a backup of your Kindle Fire in its current state so you can revert back to it at anytime. The TWRP guide also explains the exact steps needed to flash the Android 4.1 ROM onto the Kindle Fire. Just scroll down to the 7 Steps to Installing ROMs section and you’ll have Android 4.1 up and running on your Kindle Fire in no time.

If you are having any trouble getting WiFi to work, restart the Kindle Fire.

Go to Security then check the box for unknown sources to install apps from outside of Google’s appstore.

The tablet version of Android 4.1 came with the Amazon appstore pre-installed but it’s an old version and since it is a system app it won’t update or uninstall, and some Amazon apps won’t work unless it is updated. To fix this, download ROM Toolbox Lite from the Google Play store, open its app manager, and then uninstall the Amazon appstore from there. Then you can reinstall the newer version without a problem. No need to do this with the newer updated ROMs.

If you are using the tablet version of Android 4.1, don’t go into settings/display and hit the force phone UI button. It makes the touchscreen go crazy (I learned that the hard way). Once you get it to restart its okay, but getting it to power off with an inaccurate touchscreen isn’t easy.