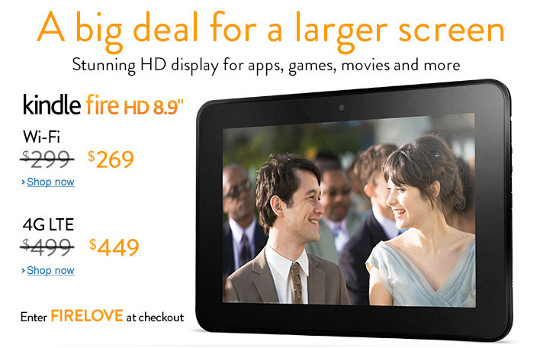 That brings the price of the base model to $269 and the 4G LTE model to $449. To get the lower price you have to enter promotional code FIRELOVE at checkout.

$269 is a good price for a large-screen tablet with a high-resolution screen. That’s the same price the Nook HD+ regularly sells for. But $449 still seems too steep for a tablet with ads, no rear camera, and no memory card slot. Amazon has put way too much of a premium on wireless, which requires a monthly/annual fee on top of the already high price to boot. It would be cheaper to get the base model and a mobile Wi-Fi hotspot like the T-Mobile hotspot I reviewed last year.

One thing to deduce about all these sales on the 8.9″ Kindle Fire HD is that it clearly isn’t selling as well as Amazon would like. Amazon never releases sales figures for Kindle devices, but looking at their bestsellers list in electronics one can compare how well certain models are doing against others, as I did a few weeks back with the best and worst selling Kindles list.

The $299 16GB 8.9″ Kindle Fire HD isn’t doing too bad. It’s currently ranked 7th on Amazon’s bestsellers list. But from there on it’s not so good. The 32GB model is all the way down at 35, and the other two variants are ranked 49 and 72. What’s even more surprising is that none of the 4G LTE models are currently on the top 100 list. Amazon sells more iPad 2’s than 4G Kindle Fires. That can’t be good.