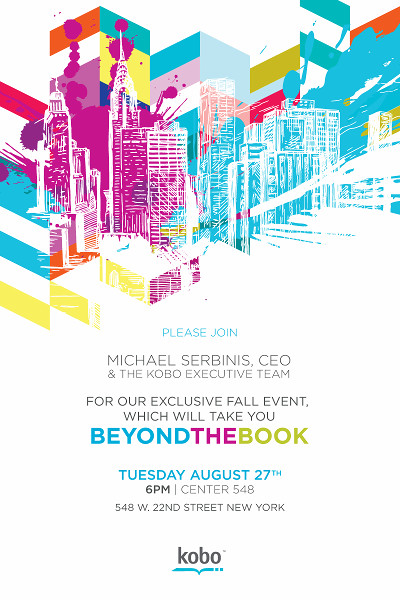 This past week Kobo did a couple of things to strengthen the notion that they plan to announce new devices soon. Most notably, Kobo sent out invitations to a press event to “See What’s Next from Kobo” scheduled for Tuesday, August 27th in New York.

Most likely Kobo will unveil what appears to be a new Kobo Glo ebook reader that showed up on the FCC website last month. And if they plan on refreshing the 6″ model, why not release a new Kobo Mini as well?

The 5″ Kobo Mini seems to have done quite well for Kobo. At $79 it is a good entry model, and it often goes on sale for as low as $49. No FCC paperwork turned for a new Mini, however, so perhaps Kobo will keep it as-is for now. Adding a frontlight to it sure would be sweet, though.

Technically Kobo is calling it a sale and not a price drop, but it’s obvious they are trying to unload remaining stock.

With Amazon expected to announce new Kindles very soon (possibly at the end of August), and Sony expected to announce the PRS-T3 that leaked last month, and with Barnes and Noble likely to add something new to the mix as well it’s going to be an interesting next couple of months in the ereading market.