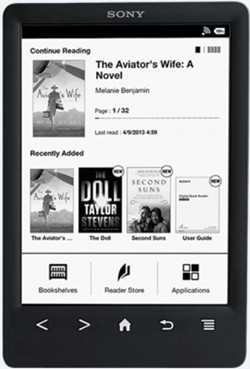 Oh, the irony. Just as Sony is getting set to close the doors on their ebook store for good in the United States and Canada on March 20th, their latest and probably last ebook reader, the Sony PRS-T3, is finally available for purchase in the U.S. from Amazon for $149. It’s being sold by a merchant called Tailwind International, and the order is fulfilled by Amazon with free shipping.

According to the description page, the PRS-T3 was first listed back on February 14th, which is about a week after Sony announced that they’d be closing the Reader Store and sending accounts over to Kobo.

Sony never officially released the PRS-T3 in the United States, which was odd because they clearly had intended to release it at one time because it passed through the FCC for approval.

Sony ended up releasing the device in parts of Europe and Canada, but they never did offer it in the U.S market, stating that they’d rather focus on tablets and smartphones for selling ebooks. Obviously that isn’t the case either now that they are closing their ebook store entirely.

There’s nothing particularly interesting about the PRS-T3; mostly it represents the end of era in the industry. Sony refused to add a frontlight like most alternatives offer these days. And it doesn’t have the latest Carta screen technology from E Ink. But it does have a microSD card slot, IR touchscreen, Wi-Fi for web browsing, and a 6-inch 1024 x 758 resolution screen.

Overall not much has changed since the PRS-T1. It was obvious Sony’s heart hadn’t been in ebook readers for several years, so it’s not surprising to see them go. Sony Readers will still probably be sold for a few years on websites like Amazon and eBay, but things will no longer be the same.