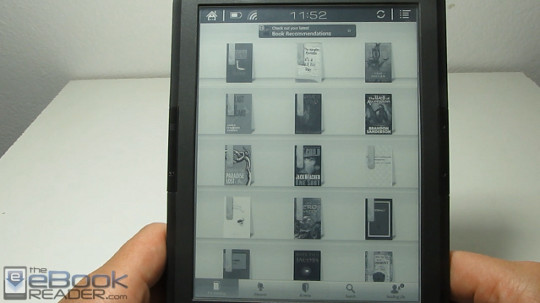 As far as third party reading apps go, the Kobo Android app fairs better than most on the Onyx Boox T68.

The number one thing is there’s no animated page transitions like with the Kindle and Google Play Books apps. This results in much smother and faster page turns.

Ghosting and afterimages are less of a problem, and the text tends to remain clearer and sharper. It’s basically on perma partial refresh, though, so there is still some ghosting, but it’s not as much of a problem as some other apps.

The store also works very well on the E Ink screen, almost like it was designed for it, but there’s just not much for sorting.

The app also lacks customization options. The text size is rather small, even on the largest setting. There only two font choices, and no way to adjust line spacing or margins. You can switch to night mode, and that’s it for layout options.

Overall the app works quite well on the Boox T68, but I forgot just how lame the Kobo Android app is in terms of features. It doesn’t even have a dictionary. You can add notes and highlights, but it takes about 30 seconds for the device to open the “select text” mode. Kobo really needs to start putting a little more effort into their Android app.

A side of effect of using the Kobo app is it makes the Boox’s default library show a whole bunch on nonsensical .htm files. The Kobo app creates these files and since one of the preloaded apps supports .htm files, it interprets these as ebooks and shows them in the library automatically. It’s a pain to deal with if you plan on using the Boox’s library and reading apps.