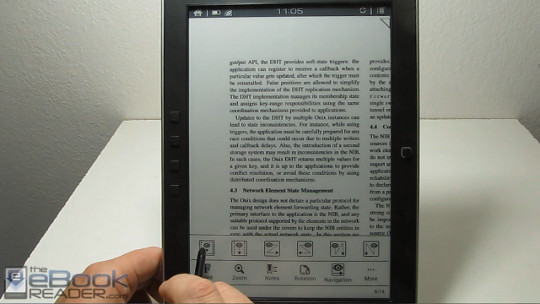 Most E Ink ebook readers don’t make very good PDF readers. But the Onyx Boox M96 is an exception. The combination of the large 9.7-inch screen and capable PDF software make it a solid choice for PDF reading.

In fact the Onyx Boox M96 is easily the best E Ink PDF reader that I’ve reviewed. The only E Ink device on the current market capable of besting it is the 13.3-inch Sony DPT-S1 PDF reader, and not very many people are willing to spend $1100 on a device that supports a single format and nothing else.

That’s what’s nice about the Boox M96—it can do a heck of a lot more than just display PDFs. The device runs open Android 4.0.2 and comes with Google Play and can install numerous Android apps.

The M96 can install several reading apps, including lots of PDF apps. But in the case of the M96, installing PDF apps really isn’t necessary because the built-in PDF apps do an excellent job and offer all the features most people are going to need.

I was surprised to find that the Onyx Boox M96 comes with a different PDF app than the Onyx Boox T68 Lynx that I just reviewed last month. It’s called Onyx Neo Reader and it works quite a bit better for PDFs than the OnyxReader app on the T68. The M96 comes with the OnyxReader app as well. The only advantage it offers over the Neo Reader is text-to-speech.

First and foremost, the Neo Reader app would be nothing without the screen. The display on the M96 is what really makes PDFs look great. Text is nice and dark and really stands out, especially when enabling the bold settings to darken the text. The M96 doesn’t have a frontlight and it doesn’t have a super high resolution screen, but once you see the device in person it’s hard to argue those points because the screen looks fantastic as it is. Everything is scaled up and larger so having higher resolution wouldn’t make much difference unless you favor reading extremely tiny text. A larger 9.7-inch screen is meant to display larger text than a 6-inch screen, so high resolution isn’t as big of a factor as it would seem.

As far as features go, the Neo Reader app pretty much covers the full gambit. The only thing lacking that I’ve noticed with the app is it doesn’t activate hyperlinks, tapping on them does nothing. The OnyxReader app has active hyperlinks, however, and TTS, as mentioned earlier. Between the two apps, all the main PDF features are covered.

The Neo Reader app offers several zooming options. There’s fit to width, fit to page, you can zoom in and out in increments, there’s auto crop and a manual selection tool that works well. There’s also some navigation settings that will effectively crop the side margins of a PDF.

The Neo Reader app offers PDF reflow too; using the up and down buttons on the nav wheel automatically adjusts font size, and there are additional settings for margins and spacing. Viewing modes can be switched to any orientation, although landscape mode isn’t really needed for most PDFs with the larger screen size.

As mentioned above, the bold setting for PDFs makes a huge difference in terms of readability. The app offers five levels of emboldening, though the first is usually enough to get the job done. There’s a custom contrast dial as well to further fine tune the appearance of the text.

Other PDF features on the Boox M96 include dictionary lookup with QuickDic, search, table of contents, you can set page refresh frequency, and add notes, highlights and bookmarks. There’s even a scribble mode where you can write directly on the screen using the stylus (the M96 has an electromagnetic touchscreen that requires using a stylus, but the nav wheel and buttons can be used for all navigation). There’s an export option too, but I haven’t figured out how it works yet (I’ll update this when I find out).

Overall the Neo Reader PDF app works quite well on the Boox M96. Everything loads quickly and smoothly, even large 90MB image-heavy PDFs. Couple that with the large 9.7-inch 1200 x 825 resolution screen and you have a surprisingly good PDF ereader.

The video review below shows all the main PDF functions on the Onyx Boox M96 Universe using the default Neo Reader app. I’ve also posted a full review of the Boox M96 that covers more details and features of the device as a whole.