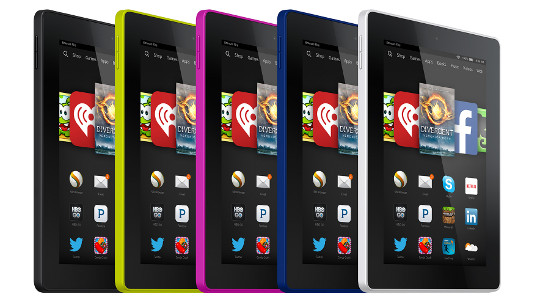 The first wave of Amazon’s new Kindle lineup for this year officially gets released today. Pre-orders have started shipping and devices are listed as “In Stock” and are available for immediate shipping.

The early release models include the new $79 Kindle Touch and both Fire HD 6 and Fire HD 7 tablets in black.

The color versions of the Fire HD tablets don’t ship for another two weeks, and the Kids Edition models and new 8.9-inch Fire HDX ship on October 21st.

The much-anticipated Kindle Voyage also gets released on October 21st. The good news with the Voyage is pre-order dates have recently moved up considerably. A few days ago the ship date was the week of December 7th; now the current ship date is November 16th.

I ordered the $79 Kindle and Fire HD 6 to review, and plan on posting first impression reviews for them later today, so check back this evening for more details! Feel free to ask any questions about them.

I’m especially interesting in seeing the $99 Fire HD 6. It has surprisingly good specs for the price, especially the high resolution 252 dpi screen. But at just 6-inches it is an unusual size. The smaller Kindle Fire tablets have always been 7-inches, the same as most other mainstream tablets. Kindle ebook readers have 6-inch screens, but the overall dimensions are different. The E Ink Kindles have 4:3 ratio screens and the Fire HD 6 is 16:10, which makes it taller and narrower.

It will also be interesting to see how the $79 Kindle stacks up to the Kindle Paperwhite and other ebook readers, seeing as how it is essentially the same as the Kindle Touch from three years ago, minus audio support. I even dug my old Kindle Touch out of the closet and charged it up to see how it compares to the new model. 🙂