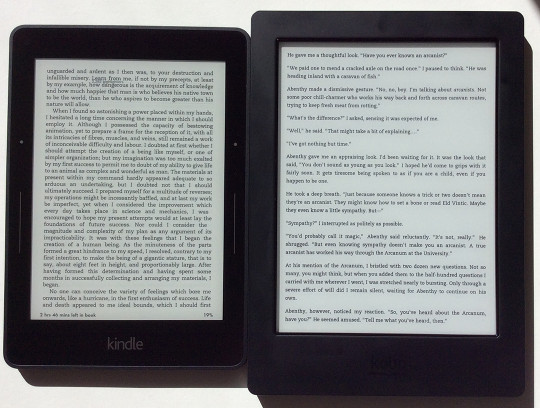 The Kindle Voyage and Kobo Aura H2O have set themselves up as the best two new ebook readers released this year, and a lot people have been asking how they compare, which is better and what to get.

Both ereaders share a number of similarities as far as software features are concerned, and each offers something the other does not. The hardware is where things differ the most between the two. So let’s start there.

Personally, I can’t see much of a difference. Text is very sharp and clear on both of them. With things like images you can see that darks are a little blacker on the Voyage, but when comparing small text with the same font type I’d say the Kobo’s screen looks better simply because the text is bolder. Below is a sample pic, click for big. 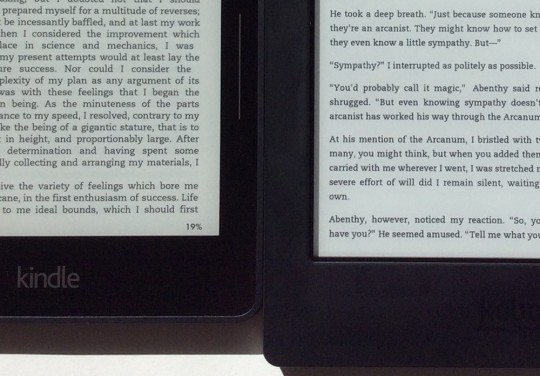 Speaking of frontlights, there’s a big difference between the two, at least when comparing the Kindle and Kobo I own. Frontlights can vary a lot, even among the same model, so take it with a grain of salt. The frontlight on my H2O has a duller, yellower tone than the Kindle’s light, which is brighter and whiter, with sort of a subtle pinkish hue. The overall tone on the Kobo is consistent across the screen except for a subtle line of shadows along the bottom. My Kindle doesn’t have the shadows, and the lighting is even across the screen, but there’s a subtle gradient of slightly orange/pink toward the top. Both frontlights offer a similar range of overall brightness levels, from super dim to blazing bright. The Aura H2O offers a handy shortcut to adjust the light by swiping up and down the left edge of the screen.

Both device use the same 1GHz processor, so overall speed and performance is similar, but the Kindle generally seems to be a bit faster for most things.

Other hardware differences include PagePress sensors along the sides of the screen for the Kindle, with the option to feel feedback when pressed, and there’s an auto-brightness sensor; the Kobo is waterproof and has a microSD card slot. Both come with 4GB of internal storage space and both have similar battery life.

The software differences are the same as mentioned on the Kindle Paperwhite and Kobo Aura H2O comparison review. Similar features among Kobo and Kindle software include the ability to add notes, highlights, bookmarks, lookup words in the dictionary, reference Wikipedia, each offers reading stats, social network sharing, search, and so on. Both offer extra features like a basic web browser and collections for organizing your content.

The main difference is the Kobo software offers more text layout settings, more font choices, and you can sideload fonts. There are more sorting options in the library, Pocket integration for reading web articles, and the homescreen has a recent tiles list that is quite unique from other devices. Kobo ereaders support ePub format natively for access to a wider choice of content, the they support CBR and CBZ comic files.

The Kindle Voyage offers some additional features, including pinch-zooming, landscape mode for ebooks, annotation exportation, there’s a vocabulary builder, contrast darken for PDFs, X-Ray, Goodreads integration, and all the exclusive Kindle features like Kindle Unlimited, Kindle FreeTime, and Prime ebooks. Amazon’s ebook prices tend to be a little lower and the shopping experience is a little smoother.