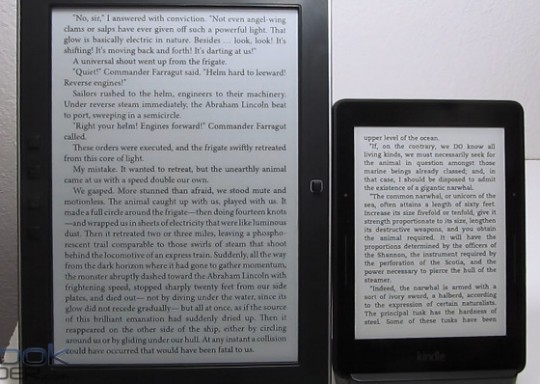 Today I wanted to put together a comparison review between two of my favorite ebook readers, the Kindle Voyage and Onyx Boox M96, to show how each has it’s own set of unique features, and how the devices are at two opposite ends of the ebook reader spectrum, both in terms of hardware and software.

Since Amazon discontinued the 9.7-inch Kindle DX, the M96 pretty much has no competition in the large ereader market, which is a shame because larger E Ink screens have a lot of advantages.

Maybe someday Amazon will release a new Kindle DX, if Fire tablet sales continue to tank, but it doesn’t seem very likely after nearly five years since the last DX was released.

The main selling points for the Kindle Voyage are the high resolution 300 ppi screen, the frontlight, the page turn sensor buttons, the lightweight, portable design, the capacitive touchscreen, and flush display.

The main selling points for the Onyx Boox M96 are the large 9.7-inch E Ink screen, the open Android 4.0 operating system with Google Play support, the advanced PDF features, the memory card slot, support for audio, Bluetooth, and the ability to add hand-written annotations onscreen with the stylus.

Resolution: The Kindle Voyage has twice as many pixels as the M96: 300 ppi vs 150 ppi. The difference is most apparent with small font sizes and images with fine details.

Frontlight: The Kindle Voyage has a frontlight to illuminate the screen and improve contrast; the M96 has no light source, so a lamp or reading light is needed in low light.

Touchscreen: The Kindle Voyage has a capacitive touchscreen with two-point touch for pinch-zooming; the Onyx Boox M96 has an electromagnetic touchscreen that requires using a special stylus, which makes pinch-zooming impossible.

Operating System: The Kindle Voyage has a basic operating system with few customization options, but it runs smoothly and offers a lot of features for ebooks; the M96 runs Android 4.0 and can be customized with a number of apps. It can even run the Kindle for Android app, but overall operation isn’t as fast and smooth as the Voyage.

Audio: The M96 has an external speaker and headphone jack for listening to music and using text-to-speech; none of the Kindle ereaders support audio anymore.

Storage: Both devices come with 4GB of internal storage space and 512MB of RAM, but the M96 also offers an SD card slot for expansion.

Price: The Kindle Voyage is $199 for the base model with ads, and works all the way up to $289 for the non-ad model with 3G wireless; the M96 sells from different places around the world—the cheapest option in the US is to get if from Amazon for $339.

For more information about each device, see the Kindle Voyage review and Onyx Boox M96 review.