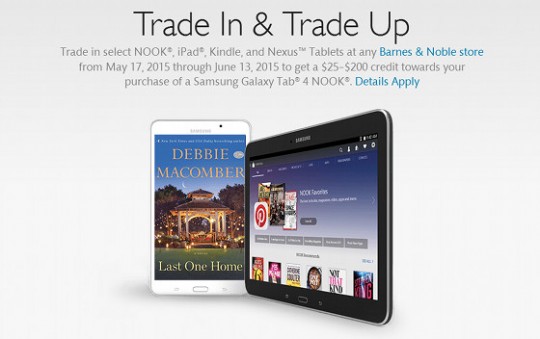 Barnes and Noble has started running a new trade-in promotion to entice people to trade an old ebook reader or tablet for credit toward the purchase of a Samsung Galaxy Tab 4 Nook tablet.

B&N is accepting select Nook, Kindle, iPad, and Nexus devices for trade in. The credit ranges from $25-$200 toward the purchase on a Galaxy Tab 4, either 7-inch or 10-inch models.

The table below lists the trade-in value for the range of devices that B&N is accepting. Some of the values are pretty pathetic; you’d be better off selling the device on eBay for twice as much.

The credit value for older Nook ebook readers is pretty good, though. $50 for a 1st Edition Nook and Nook Simple Touch is considerably more generous than $25 for a Kindle Paperwhite or Nexus 7, especially when you can buy a new Nook Touch on eBay for $40 with free shipping.

Barnes and Noble also just cut the price of their Galaxy Tab 4 Nook tablets, which isn’t surprising now that Samsung has started releasing new tablets for 2015. The 7-inch Tab 4 Nook used to sell for $179; now it’s down to $149. The 10-inch is $279. The regular Galaxy Tab 4 is almost always cheaper on Amazon, and it still is at $139, so B&N still can win. But if you’ve got an old device to trade-in you can get a Galaxy Tab 4 Nook at a pretty steep discount.