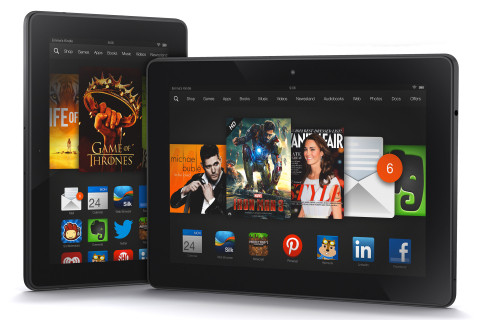 Text-to-speech is one of the features that sets Kindle books apart from the likes of Kobo and Nook. But not all Kindle devices and apps support text-to-speech. In fact most don’t support TTS.

Text-to-speech used to be a pretty big feature for Kindles, but Amazon doesn’t seem to be interested in evolving it much further anymore—now they’d rather push selling audiobooks instead and promote their Whispersync for Voice feature that syncs audiobooks and ebooks together in the same app.

Kindle ebook readers used to support TTS. The Kindle 3 (also called the Kindle Keyboard) and Kindle Touch were the last to support it.

Now if you want text-to-speech for Kindle books you pretty much have to buy a Fire tablet or a Fire phone because none of the newer Kindles support TTS at all, not even the $289 Kindle Voyage.

None of the Kindle apps for iOS, Android, Blackberry, Windows, or the Kindle Cloud Reader officially support text-to-speech.

There are some workarounds, however. With the Kindle for Android app you can use TalkBack, an accessibility app for Android devices designed to read screen content aloud.

With iOS devices like the iPad and iPhone, you can use a screen reading accessibility feature called Speak Screen that works pretty well with the Kindle app, and it even automatically turns pages and can run in the background so that you can use other apps while listening to the book being read aloud.

Neither solution for Android or iOS is as convenient or as easy-to-use as Amazon’s regular text-to-speech, but it can get the job done.

Keep in mind that not all Kindle books support text-to-speech, just the ones where authors and publishers have approved it. All Kindle books show if TTS is enable or not on their description page at Amazon. Of course this doesn’t matter if you’re using an accessibility app like TalkBack or Speak Screen.

Text-to-Speech for Kindle books is officially supported on the following devices:

The older Kindle ereaders have more of a robotic TTS voice whereas the Fire tablets use more pleasant and human-like IVONA voices. For more info see this Kindle Text to Speech Review, which includes a video demonstrating the different voices and settings on Fire tablets.