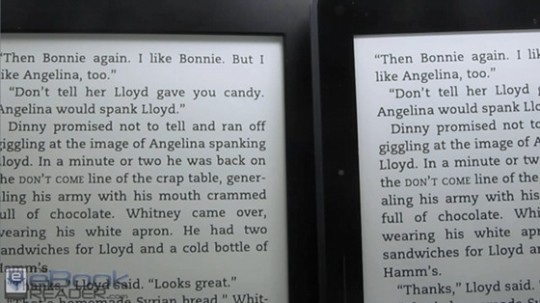 When Amazon first announced the Kindle Paperwhite 3 and it turned out the main change was the addition of an upgraded 300 ppi E Ink screen, the same exact screen that comes with the more expensive Kindle Voyage, many thought that it would close the gap on the Voyage to a point where it wouldn’t justify the premium price.

As it turns out, the Voyage doesn’t really have anything to worry about. In a head-to-head battle the Voyage is clearly superior to the Kindle Paperwhite 3.

For many people the differences probably aren’t worth enough to spend an extra $80 more, but if you could somehow get either device for free, not many people would pick the Paperwhite over the Voyage.

In part because of the high price, the Voyage hasn’t gotten the respect that it deserves but it really is one of the best ebook readers ever made.

When it comes to software, both Kindles are virtually identical, aside from a couple added options in the menu for the extra hardware features on the Voyage (page sensors, brightness sensor). All the software features are the same and everything operates at the same exact speed.

Both devices have the same processor, the same amount of RAM, and the same storage space.

The only differences are the design and the added hardware features on the Voyage, which includes front and back page turn sensors on both sides of the screen, with the option to give off feedback when pressed, and an automatic brightness adjuster.

The main difference with the Voyage is it has a flush front screen with micro-etched glass. In addition to looking cool, it helps make the text appear slightly clearer, sharper, and darker than the Kindle Paperwhite 3’s screen, which looks good but the capacitive touch layer clouds the screen ever so slightly.

In a direct side-by-side comparison, the Kindle Voyage has a marginally better screen. The background color is lighter and the text is darker, leading to overall better contrast. The difference is subtle enough that it doesn’t show up well in pictures (that’s why I don’t even bother trying anymore). It’s one of those things you have to see in person to truly get an accurate take on.

Both the Kindle Voyage and Kindle Paperwhite have really nice frontlights with a good range of brightness settings.

Once again the Voyage does have a slight edge. Its frontlight is a little lighter in tone, which helps give the text better contrast. The Voyage’s frontlight is also a little more even across the screen, with less shadows at the bottom (see video for more, and don’t pay attention to the bright spot—it’s on the inside of my camera lens and won’t go away).

Back when the Voyage was first released, there were lots of complaints about subtle color variations with the frontlight. I noticed them at first too, but after awhile it’s like they totally disappear and I don’t notice it at all anymore (mostly because I tend to keep the light low, which is how it’s supposed to be). To my eyes, the Voyage’s screen and frontlight are the best currently out there. But the Paperwhite is close behind.

The page sensors on the Kindle Voyage are a nice feature but they aren’t without some flaws.

The Good: The page sensor buttons can be turned on and off in settings, and they have three adjustable pressure settings. Even at the lowest pressure it requires pressing hard enough that accidental presses aren’t a problem (however accidently brushing the screen can be an issue if you have big thumbs). There’s also the option to have the Kindle give off feedback (a slight vibration) when the buttons are pressed, which can also be toggled on and off and adjusted by three increments.

The Not-so-Good: You can’t feel or see the sensors at night, which is fine for the page forward sensor if you leave your thumb resting on it, but finding the back button isn’t easy. Plus the back button is rather high and awkward to use without readjusting your grip (just tapping the screen is easier).

If you have the extra money to spend there’s no reason not to get the Kindle Voyage over the Paperwhite. But for most people the Paperwhite is the more economical choice. You get all the same exact reading features on both devices, so it really just comes down to personal preference.

It’s still the same story as with the Paperwhite 2. Is the Voyage’s slightly better screen, the thinner and lighter design, the auto brightness sensor and page sensor buttons worth an extra $80 to you? If not, then the Kindle Paperwhite 3 is the way to go.