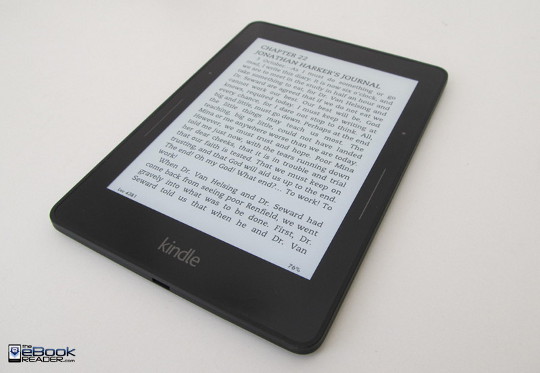 The Kindle Voyage was released a couple weeks ago now, and it looks like the frontlight gradient issue that I mentioned in my Kindle Voyage first impressions review is a common complaint mentioned by many among the first wave of reviews.

Looking over the user reviews at Amazon, there are 260 reviews posted for the Kindle Voyage as of this writing. Of those, 86 are “critical” reviews with three stars or less, a pretty high number considering the premium price tag of Amazon’s latest ebook reader.

Overall the Kindle Voyage currently has 3.8 stars. By comparison the 2014 basic Kindle has 4.0 stars and the Kindle Paperwhite is blowing both of them away with 4.5 stars over 20,000 reviews.

By far the #1 complaint among critical reviews is the uneven frontlight. Here are a few samples:

The top of the display is noticeably darker and sepia-toned compared to the bottom. I read on the Voyage for a half-hour to see if the effect is noticeable and the answer is: it is very distracting.

I’ve seen the reports online of users who have a “two toned” screen — blueish on the bottom, yellowish on the top. I’m afraid to say that I have experienced this as well.

There is yellow shading on the top 1/3 of the screen that you just can’t get used to due to having the issue on every page you read! Give me yellow or give me a blue tint but DON’T give me both! Don’t think you have it? Cover the middle of the screen and look at the top and bottom independently.

The reason I am sending back my Voyage is for the screen shadings. Mine is not as bad as some of the ones shown but it does have the yellow shading at the top intermixed with a bluish white as you get to the bottom of the screen. Where I settled for the blotchy screen with the PW 1, I cannot bring myself to settle for the defective screen on the Voyage.

My Kindle Voyage has the same exact issue that those reviewers mention. In fact the very first thing I noticed when I first turned the Voyage on was the light being a different color at the top of the screen than on the bottom.

Some people swear that their Kindle is free of this issue and that the lighting is 100% even. Some people think that all Kindle Voyages suffer from the problem to some degree and that some people simply cannot see it.

There may be some truth to that, but it’s hard to say. As I sit here at the desk with the Kindle Voyage in front of me, the screen does indeed look perfect. With good ambient lighting and with the frontlight set low, or when using auto-brightness, the light imperfections are completely unnoticeable. It’s when the frontlight is set to higher brightness that the different hues are most noticeable, and especially at night when there is no ambient lighting.

I do find the light gradient distracting at times, and other times I don’t notice it at all. I find it most distracting in landscape mode because every line goes from light to yellowish.

I wonder how long before Amazon starts putting a disclaimer on the product page for the Voyage saying that the lighting gradient is a feature and not a defect, as they did with the 1st gen Kindle Paperwhite and then again with last year’s Fire HDX when people started complaining about the blue border that surrounds the screen.

One interesting detail about all this is that none of the so-called “expert” reviews from any of the major tech sites mention anything about the frontlight not being even. Type “Kindle Voyage Review” into Google search and not a single one on the first page mentions a single thing about frontlight unevenness. In fact a couple of the reviews specifically say the frontlight is perfectly uniform across the entire screen.