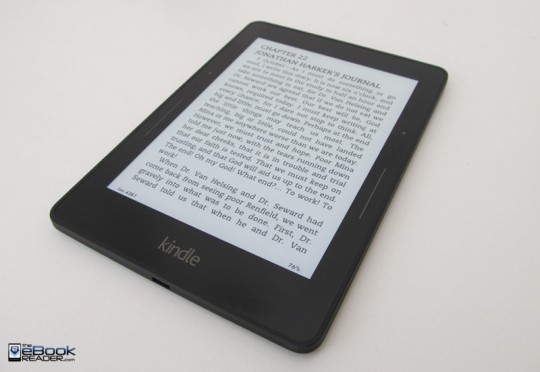 Amazon’s latest new ebook reader, the Kindle Voyage, was released this week. I already posted a comparison review between it and the Kindle Paperwhite yesterday, and now I’ve got a full video walkthrough and first impressions review ready to go.

I had anticipated that the Kindle Voyage would clearly standout as the best ebook reader on the market this year given all the pre-release hype and the premium price tag Amazon placed on it, along with all the hardware upgrades—the 300 PPI screen, the PagePress sensors and haptic feedback, the auto-brightness sensor, the flush screen and thinner design—but the Kindle Voyage doesn’t knock it out of the park like I thought it would, and it leaves the door open for other devices like the new Kobo Aura H2O.

The improvements are nice, but the Kindle Voyage has kind of a Jekyll and Hyde thing going on. For instance, the screen is both impressive and disappointing at the same time. And the new page turn sensors are nice to have but they are also kind of annoying. This is how it is:

The best thing about the new Kindle Voyage is the screen. The clarity of the 300 PPI E Ink Carta display is indeed impressive. Blacks are noticeably darker, and the background is noticeably whiter. The smallest font setting is especially clear, whereas the Paperwhite with its 212 PPI screen looks more fuzzy.

Hopefully these new 300 PPI screens become the new standard moving forward because they are definitely the best-looking E Ink screens yet.

The screen on the Kindle Voyage looks fantastic when there’s good ambient lighting. But the frontlight isn’t as uniform across the screen as it is on the Paperwhite 2. There’s sort of an orange gradient at the top of the screen. With auto-brightness enabled it keeps the light low enough the discoloration is almost unnoticeable; it’s more apparent with brightness turned up high in a dark room. The thing with frontlights, though, is they are inconsistent. They vary a lot from one device to the next, so it’s always hard to know what you’re going to get.

I’ve found that the auto-brightness setting works great…when it actually works. I don’t know if it’s a software bug or a defective sensor, but auto-brightness only works part of the time on my Kindle Voyage. I’ve tried powering off, restarting, unchecking and rechecking the box multiple times, but there are times when nothing makes it work. The times it does work I really like how it keeps adjusting to different lighting conditions in different rooms; it keeps the brightness level perfect, which is something I find tablets never do.

I thought that I would really like the PagePress sensors for turning paging because I favor using hardware buttons for turning pages like on the Onyx Boox T68, just resting your thumb on a button and not having to move it every thirty seconds to page forward is nice, but so far the page sensors on the Kindle Voyage really aren’t doing it for me. First, they seem best suited for someone with small hands. My big gorilla hands have a hard time holding the Kindle in a way that’s comfortable to use the page button sensors. The bezel is so narrow that I find my thumb overlapping onto the screen, which inadvertently turns pages and highlights words. Plus the Voyage’s edges are so thin and tapered there isn’t enough to hold onto; it seems like it would be much better with a cover to give more of a place to grip.

Another problem is the back button sensors are placed so high that it’s difficult to reach them without entirely readjusting how you’re holding the Kindle; simply reaching over to the screen is so much easier.

The most perplexing thing about the PagePress sensors to me is the haptic feedback. Luckily it can be turned off because I find it very unpleasant. There are three levels of feedback you can choose between in the settings menu. When you press the sensor, it makes it so the Kindle Voyage vibrates slightly. I find it completely distracting. It’s jarring even on the lowest setting and takes me immediately out of the book. The Kindle is supposed to disappear when reading, not lightly shock you when turning pages (there’s no electricity involved but it does kind of feel like a mild static shock). You can see the page turning anyway so what’s it need to vibrate for? It’s kind of a weird feature…

I’ll post a full review in a week or two after more testing, along some secondary reviews for PDFs and comparisons. Subscribe to keep updated!