It’s time for another roundup of 10 free highly-rated Kindle ebooks for your Easter Sunday.

Also don’t forget about the free audiobook copy of Black Beauty that Amazon is giving away this month.

Please note that the free Kindle ebooks listed below are free as of March 27th, 2016. Most of these titles are free for a limited time only and will expire in a few days before going back to the regular list price.

Rumor has it there’s a Russian you can turn to if you’re very rich, and need dirty deeds done without a trace. The CIA calls him Ivan the Ghost because he’s operated for years without leaving a trail or revealing his face. Until now. For the first time in history, Ivan appears to have slipped. The CIA’s new director sets Agent Kyle Achilles on an intercept course, surveilling the daughter of a British politician. Then Ivan pulls off a masterful con, and Emily vanishes. With Emily’s life, his career, and America’s reputation at stake, Achilles partners with an unlikely new agent he meets in France. Together they attempt to get one step ahead of the legendary Russian, while rubbing elbows with the ultra-rich in a high-tech international chase.

Among Wolves: Book 1 in the Children Of The Mountain series by R.A. Hakok

There’s only one place left that’s safe. It’s the last place you should be. Gabriel remembers the Last Day. He and Mags had been on a tour of the White House with the rest of Miss Kimble’s first-graders when it happened. They fled with the President to a long-abandoned bunker, even as the first of the bombs began to fall. Ten years have passed, and now Gabriel is almost grown. He still lives deep inside the mountain, waiting for the world to thaw. But outside the storms continue to rage, and supplies are running low. The President says it will be okay, because they are the Chosen Ones. But Gabriel isn’t so sure. Gabriel’s their scavenger, and he’s seen what it’s like out there…

First in a new series. After her parents die within six months of each other and her son goes off to college, savvy entrepreneur Cara Mia Delgatto decides to construct a new life for herself. A road trip leads to her grandfather’s home on the picturesque Treasure Coast of Florida, where she impulsively snaps up a “tear down,” a building scheduled for the wrecking ball–only to discover it’s already occupied by a fresh corpse. While Detective Lou Murray tries to nail the killer to the wall, Cara Mia enlists the help of two new friends to open a store specializing in one-of-a-kind, recycled, and repurposed items. But before she can get down to brass tacks, Cara Mia decides to help Lou figure out “whodunit,” because she’s been painted into the picture as one of the prime suspects….

The Marker by Meggan Connors

When her father loses her in a poker game, Lexie Markland is sent to work in the household of Nicholas Wetherby for one year to pay off the debt. Innocent, but not naïve, she is savvy enough to know she must maintain her distance from this man, who frustrates her with his relentless teasing but whose kisses bring her to her knees. Because although she may be just another conquest to him, it’s not just her heart in jeopardy should she succumb to Nicholas’ considerable charms….

Kyra, 15, dreams of becoming a famed warrior, like her father, even though she is the only girl in a fort of boys. As she struggles to understand her special skills, her mysterious inner power, she realizes she is different than the others. But a secret is being kept from her about her birth and the prophecy surrounding her, leaving her to wonder who she really is. When Kyra comes of age and the local lord comes to take her away, her father wants to wed her off to save her. Kyra, though, refuses, and she journeys out on her own, into a dangerous wood, where she encounters a wounded dragon—and ignites a series of events that will change the kingdom forever….

Rosemary Field never planned to work as a private, holistic chef for a demanding vegan actress. But then, plans have a way of going out the window when a girl’s parents skip town, leaving behind a half-million-dollar debt. She needs the job, so she puts up with her boss’s diva antics and halfheartedly fends off the advances of the impossibly sexy stepson who comes with the high-paying gig. Then someone decides to kill the miserable movie star. It’s bad news for any chef when a client dies from an allergic reaction after eating your cooking. It’s even worse news for Rosemary because the police are determined to charge her with murder….

An ancient book, a power untouched, and a heart unloved lead Keelin O’Brien from her graduate studies in Boston to a small village on the coast of Southern Ireland. Determined to unearth the secrets lying hidden in the enchanted waters of the cove, Keelin has little time for a surly Irishman who infuriates her during the day and haunts her fantasies at night. Inexplicably drawn to the woman who has stepped from his dreams and into his world, Flynn fights a stubborn battle against his increasing attraction for Keelin. Forces unknown have better plans for the two. Only the secrets of the cove can show Keelin who she really is, the beauty of her mysterious power, and a love that will break the bounds of what she knows.

Tess O’Connor has never fought in a duel, ridden a Fae steed descended from a dragon, or touched taebramh, the magical substance that gives mortals dreams. She has never faced down a garrelnost or traveled the hidden mysterious pathways between the mortal world and the realm of the Fae. She has never felt a magnetic attraction to a perilously handsome Sidhe knight with eyes as deep and impenetrable as the ocean. Tess O’Connor stopped believing in fairy tales as a child when her father died…but all that changes when she discovers that her best friend Molly is half-Fae—and has been summoned to the Unseelie Court by Queen Mab herself….

When he kissed me, I was shocked. He was a stranger and still so familiar. It wasn’t until I woke up to my picture splashed on the cover of tabloids that I realized I knew who he was. Prince Alexander of Cambridge. Royal bad boy. Exiled heir to the throne. He isn’t Prince Charming. He’s controlling. He’s demanding. He’s dangerous. And I can’t say no to him. We both have secrets—secrets that could tear us apart or drive us closer together—and as the paparazzi exposes each one, I have to decide just how far I’m willing to go for King and Country. 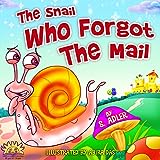 Free Audio Book (Flip-Book)
“You forgot the mail?!?!”
The king yelled at the snail.
But the snail stayed as calm as could be.
He was not afraid of the king, you see.
He knew where the gift was; he knew what to do.
The monsters learned that patience pays off too.