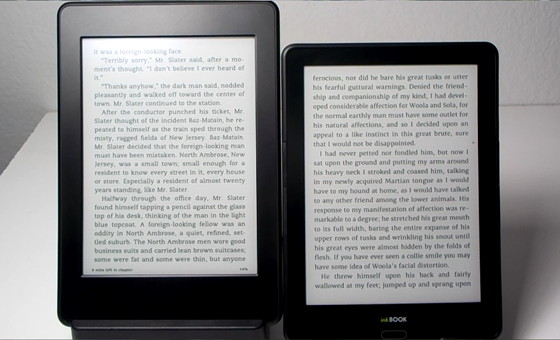 I posted an InkBook Prime review a couple weeks ago and some people asked how it compares to the Kindle Paperwhite so here’s a quick comparison review.

I didn’t go into as much detail as usual with the video comparison since it looks like Amazon might release a new waterproof Kindle soon that could potentially replace the Paperwhite 3, but that isn’t certain yet.

One of the differences between the two devices is the Kindle Paperwhite has a 300 ppi E Ink screen and the InkBook Prime has a 212 ppi screen, so text is a bit sharper and darker on the Kindle but the difference isn’t considerable.

Both have nice evenly-lit frontlights, except the Kindle’s goes much dimmer so it has an advantage there for late-night reading.

The InkBook Prime has a flush glass screen and a smaller more streamlined design that is nicer than the bigger and somewhat blockier Paperwhite, and it also adds two page buttons on each side of the screen, along with a sensor button below the screen that acts as a back button.

You can program the buttons on the InkBook to do other things too, such as disabling the touchscreen or opening the menu.

One of the main advantages with the InkBook is the fact that it comes with more storage space and it has a microSD card slot for expansion.

The other big advantage for the InkBook is the fact that it runs open Android 4.2 and it can install apps, including various reading apps such as the Kindle Android app.

The Paperwhite’s font’s are more optimized for E Ink, however, so text looks better on the Kindle than the Kindle app.

The InkBook also adds Bluetooth for headphones and speakers, but I couldn’t get it to work with a keyboard.

The InkBook has a faster 1.6 GHz quad-core processor but the Kindle is faster in virtually every way with its single-core 1 GHz processor, although page turn speed between the two is about the same.

The Kindle’s software is more advanced and refined when it comes to reading. It adds a bunch of extra features like a vocabulary builder with flash cards, word wise to learn difficult words, translations, X-ray, page scan, notes are exportable, etc. The Kindle also has nifty manga features and it works a lot better for PDFs.

At $119, both devices sell for about the same price but the Kindle costs $20 more to remove the ads and there’s also the option for a 3G model.

Check out the individual reviews for a complete rundown of the features and specs for the Kindle Paperwhite 3 and InkBook Prime.