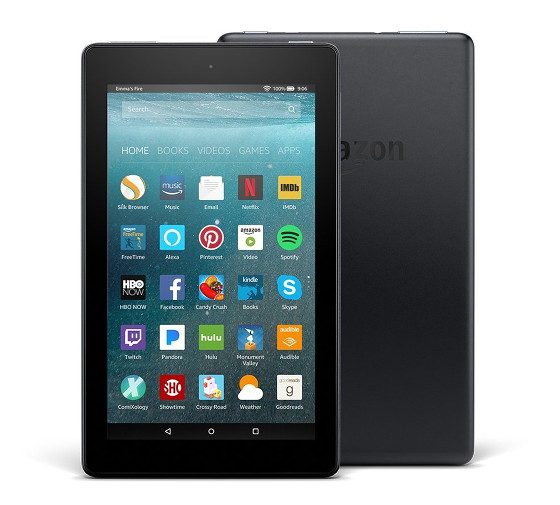 I already posted a comparison review between the new Fire and old Fire but not a lot has changed.

The new model has a nicer display and battery life is 1 hour longer, but most of the hardware remains the same and the software is virtually identical.

They changed the design slightly by making the new Fire a bit thinner and lighter, and the edges are more rounded so it’s more comfortable to hold.

I’m just going to post a short review for this tablet, but feel free to ask questions in the comments section. I plan on posting a review specifically about the reading and text-to-speech features too since that’s more this website’s style.

The $49 Fire is one of the cheapest tablets on the market and it offers a wide range of features for the price so it’s hard to argue about the overall value, especially since the Google Play Store can be easily installed in about 5 minutes.

The $49 Fire makes for a good secondary tablet, or a tablet for kids, or something for on-the-go. It’s great for downloading Amazon content, particularly all the free content available for Prime members. You can load up a memory card full of Prime videos and Prime music and it doesn’t cost a dime.

But if you don’t want to use any of Amazon’s services then it doesn’t make sense to buy a Fire tablet. They are designed for people that use Amazon for videos, music, audiobooks and ebooks, and just shopping in general. It would be a pretty crummy tablet for someone that doesn’t use Amazon at all.

Sure, the Fire tablet has some shortcomings, like the pitiful speaker and low-quality cameras, and it’s kind of slow by today’s standards, but for $49 it hard to complain much because it does enough things well enough to be useful, and the tight integration with Amazon’s services has its advantages.

Personally I like the new Fire HD 8 a little better because it’s faster and the larger screen looks a bit nicer, but the added weight and bigger size make it less comfortable to hold and less portable, so that’s something to consider as well. See here for the $49 Fire vs Fire HD 8 comparison review.