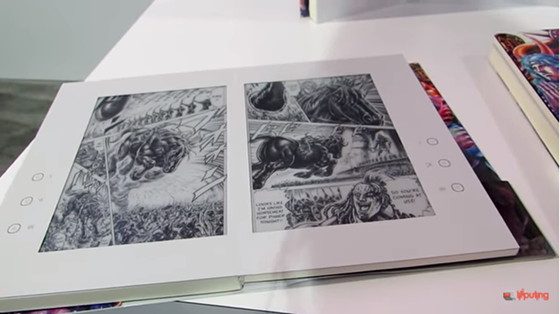 E Ink doesn’t get much attention at CES anymore, but at least there’s one new ereading device worth noting, except it’s not what you’d expect from a typical ebook reader.

The eOneBook is a specialized dual-screen E Ink device designed for reading manga.

The funny thing about the eOneBook is that it looks just like a regular book when it’s closed; it’s not thin and small like a typical ereader.

In fact it even has an outer sleeve like a dust jacket on a hardcover.

It comes pre-loaded with the complete Fist of the North Star manga series, which includes all 18 volumes.

It supports both English and Japanese languages, and they’re expected to release other eOneBook devices in the future with different content pre-loaded.

The eOneBook is a basic device without Wi-Fi or a touchscreen, and it’s not possible to load other content onto it, so it’s far from a typical ereader. It’s more of an electronic book than an ebook reader.

Another odd detail is the fact that it’s powered by AAA batteries instead of having a built-in rechargeable battery like most portable devices.

The eOneBook is expected to start shipping in February and will sell for about $300.

Last summer a similar kind of dual-page ereader was demoed at a trade show but it had one flexible E Ink screen that folded in the middle instead of two separate screens. Perhaps we’ll start seeing more of these dual-screen ereaders getting released in 2018.