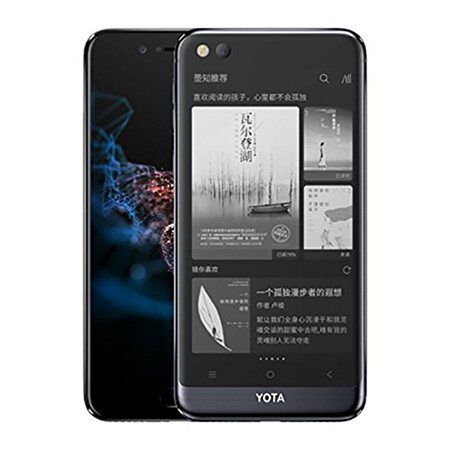 The YotaPhone was one of the first smartphones to use a dual-screen design to add an E Ink display to the backside of a phone.

Now in its third generation, the YotaPhone is still around, at least in some parts of the world. The YotaPhone 2 was never officially brought to the US and it doesn’t look like the YotaPhone 3 will be either, but it is available to order from various websites online.

It sells for a small fortune on sites like Amazon and eBay, but AliExpress is selling the Yota 3 for $499.

It was first released last fall but it was only available in China initially.

The YotaPhone 3 made a brief appearance in the E Ink video tour from Display Week that was posted last week. That got me wondering if it was available outside of China yet and that certainly appears to be the case.

It’s quite expensive but it’s also very unique with the 5.5″ AMOLED screen on the front and a 5.2″ E Ink Carta screen on the back.

The Hisense A2 Pro phone also has an E Ink screen on the back and it’s quite a bit cheaper, currently $367 at AliExpress. There aren’t many options for E Ink screens in the phone world, but at least there are a couple of different choices if that’s something you’re looking for.