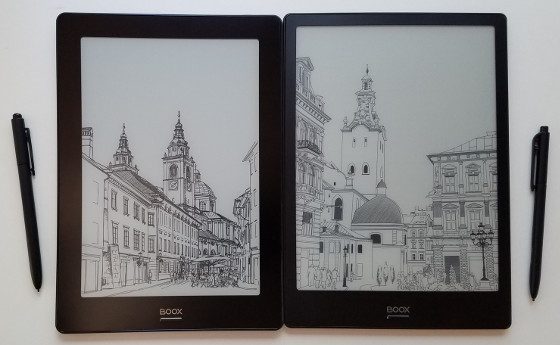 Onyx recently released the new Onyx Boox Note S with a 9.7-inch E Ink screen. It pretty much has the same exact features as the 10.3-inch Onyx Boox Note that was released a few months ago, except the Note S is cheaper so it comes with some downgrades.

See my Onyx Boox Note review for a closer look at it, and I’ll post a full review of the Note S soon.

Here’s a summary of how the two models compare:

Both run the same Android 6.0 software and have the same software features and the same included apps (except Google Play doesn’t work on the Note S).

They have the same 1.6GHz quad-core processor.

Both have capacitive touchscreens and both come with a stylus pen to write on the screen.

Both have similar designs with a back button below the screen, a USB-C port on the lower edge, two speakers on the back, and a power button on the top edge.

Both have Wi-Fi and Bluetooth.

The Note S stylus is slightly larger but they both have the same hard plastic tip with an eraser on the top and there’s a button you can press to activate erasing with the tip. However, they use different technologies so they aren’t interchangeable.

The Google Play Store does not work on the 9.7 Note S; it gives an uncertified Android device error. I don’t know if they will fix that or not but you can still sideload apps from other sources.

The Note S is more prone to bogging down and not responding, possibly because of less RAM or perhaps a bug.

The 9.7-inch Note S has a flush glass screen and a glass-based E Ink Carta display with a resolution of 1200 x 825 (150 ppi). Because of the lower resolution, text appears a bit fuzzier and bolder.

Writing on the glass screen feels less natural and kind of awkward but that can probably be remedied with a screen protector.

The glass screen is more resistant to scratches; the 10.3 Note’s screen can show marks and scratches if you press down really hard with the stylus when not using a screen protector.

Because of the low resolution screen, the Kindle app doesn’t work as well on the Note S. Everything is scaled up and the smallest font size is too large and the margins are huge.