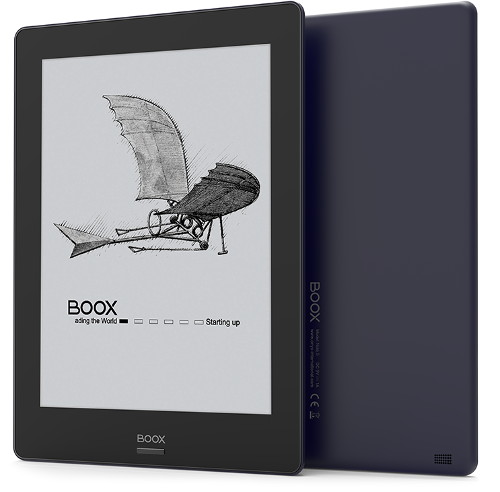 Basically the Note S has half the storage space and RAM, and a lower resolution glass-based screen with a cheaper Hanvon digitizer rather than Wacom.

But the Note S runs the same Android 6.0 software as the more expensive model and both share the same features and functions, except the Google Play Store doesn’t work on the Note S (more on this in the software section).

In terms of specs, the Onyx Boox Note S has a quad-core 1.6GHz processor with 1GB of RAM and 16GB of storage space. It has a touchscreen that supports both finger touch and stylus touch using an included stylus.

Timing is a funny thing. If I would’ve reviewed the Onyx Boox Note S before reviewing the 10.3-inch Note, I probably would have liked it a lot more. But having reviewed the 10.3 Note first, I can’t help but be disappointed with the Note S.

First off, the lack of Google Play support makes it more of a hassle to install apps since you have to rely on 3rd party sources (Update: Google Play now works on the Note S). There’s also the fact that the Kindle app doesn’t work nearly as well on the Note S as the regular Note, simply because the lower resolution of the Note S forces the Kindle app to use XL mode where everything is scaled up to ridiculous proportions. Plus I’ve encountered a number of freeze-ups where an app stops responding, which rarely happens on the 10.3-inch Note.

That being said, the built-in reading app, Neo Reader 2, works well for PDFs, and the larger screen, while not as sharp and clear as other models, is a nice step up from smaller ereaders for larger form content like PDFs and comics, and the web browser actually works pretty well too. Writing on the slick glass screen takes some getting used to, but the note-taking app does work well.

Personally I like the 10.3-inch Note a lot better, but at $549 it’s quite a bit more expensive than the 9.7-inch Note S at $389. If the Note S was priced closer to $300 it would be a lot easier to recommend considering the low resolution screen, but at least it does give people an option for a less expensive model with the same software and general feature-set as the 10.3-inch Note.

The Onyx Boox Note S is an upgraded version of the earlier Boox N96 models. It has a new trimmed down design that weighs about 90 grams less. They did away with the stylus loop and the page and menu buttons, as well as the memory card slot and metal back.

Aside from the flush glass screen, it looks similar to the 10.3-inch Note with a back button below the screen, two speakers on the back, a USB-C port on the lower edge, and a power button on top.

While the glass screen does make it considerably heavier than the larger 10.3-inch Note, the glass front does help make the Note S feel more solid and sturdy than its larger counterpart. And the tempered glass is less prone to scratching and showing marks.

Simply put, the screen is the biggest thing holding back the Onyx Boox Note S. If they would have added a frontlight that would at least have given it something the other models lack, but unfortunately that’s not the case.

It has a 9.7-inch E Ink Carta display with a resolution of 1200 x 825, which equates to a lowly 150 ppi—that’s as low as it gets when it comes to ereader displays. Considering the fact these larger devices are often used to read PDFs with small text, than can be a problem.

Luckily Onyx’s software offers ample zooming and cropping options so you can often work around the problem, but it’s certainly less than ideal. The 227 ppi screen on the 10.3-inch Note offers a significant boost in overall clarity.

But it’s not just the low ppi. The glass screen and capacitive screen take a bit away from the contrast as well. The previous Boox N96ML has the same exact screen, with the option for a frontlight, and it clearly has a lighter background and sharper text than the Note S.

Another thing I don’t like about the glass is the fact that writing on it using a stylus with a hard plastic tip feels nothing like writing on paper. The slick, sliding feel of the glass takes some getting used to, and the glass adds extra space above the screen so there’s a bit of distance between the tip and the screen so it feels a bit odd.

The Onyx Boox Note S has two touchscreens, capacitive for finger touch and a Hanvon digitizer for stylus touch.

The capacitive touchscreen works well and is accurate. Pinch-zooming, selecting text, and tapping small icons all seem to register properly.

I was curious to see how the Hanvon touchscreen compares to the Wacom touchscreen on the 10.3-inch Note and Onyx Boox Max2. I think it’s the same as the N96 touchscreen but they don’t specify that anywhere.

For the most part the functionality is the same, but I find you have to tap harder on the Note S to get it to register when selecting things. But that might have something to do with the glass screen more so than the touchscreen tech.

When it comes to writing, the Hanvon touchscreen is plenty quick and responsive. I don’t have any problem with random lines appearing like on the N96. The only thing is the lines appear a lot more jagged than they do on Wacom screens.

The Hanvon touchscreen on the Note S supports 1024 levels of pressure sensitivity so the thickness of the lines varies depending on how hard you press down. The 10.3 Note has 4 times more pressure sensitivity. It’s not a huge difference but it is noticeable when writing. 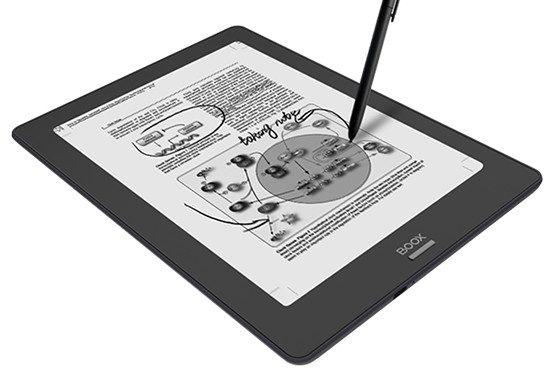 Onyx’s newer devices run Android 6.0, a nice step up from Android 4.0 on their earlier models, and they are open to install Android apps.

However, the Google Play Store does not work on the Boox Note S because of Google’s new policy to block Google apps on uncertified devices (the 10.3-inch Note and Max2 got in before the policy change so the Play Store still works on them). Update: Google Play now works on the Note S as well, as noted in the comments below.

So I installed the Aptoide appstore and used it to install apps like Dropbox, Kindle, rotation control, Astro file manager, ReLaunchX (an alternative homescreen launcher designed for E Ink ereaders), and a writing app.

As mentioned earlier, the Kindle app is a letdown on the Note S because the low resolution screen forces the app to use a XL mode that renders everything super huge. The smallest font size is gigantic, margins are massive, menus take up the whole screen. There are workarounds to change dpi scaling but it’s too much of a hassle to deal with as far as I’m concerned.

One thing to note, and it’s the same with Onyx’s other devices, is the fact that the stylus isn’t going to work well with other 3rd party note apps like OneNote because those apps aren’t designed for these types of devices with E Ink screens. But the built-in Notes app can sync with Dropbox and Evernote.

The built-in Neo Reader app supports several formats and it offers a number of features, especially for PDFs. You can sideload your own fonts and export all notes and highlights as well.

You can add handwritten notes directly to PDFs but not ePubs, just sidenotes. You also have to enter a special notes mode to write on the screen, and you can’t scroll, add highlights, or access the dictionary without manually exiting notes mode, so it’s a bit different than other note-taking devices like the Sony DPT-RP1, for instance.