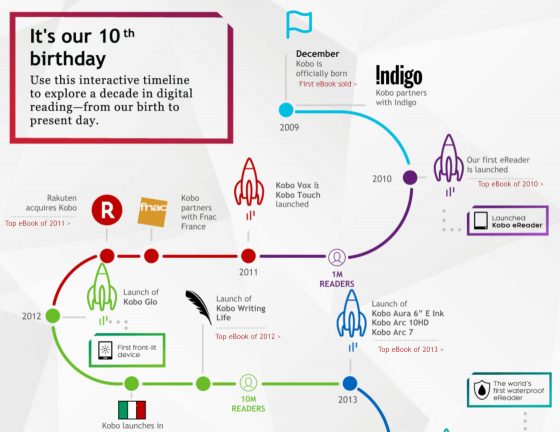 Kobo is celebrating their 10th birthday this month. Before they were Kobo they were Shortcovers so they’ve been around longer than that, but they rebranded the company to Kobo in December 2009.

They posted a nifty interactive timeline on their website that shows how Kobo has evolved over the past ten years.

The timeline lists things like the first ebook they ever sold, the top ebooks for each year, and all the partners and new products that Kobo has released over the years.

Things have really tapered off in 2019 but there was a lot action in the previous 9 years.

One interesting detail to note is the last entry on the list where they claim to have 45 million readers as of December 2019.

What that number means exactly is anyone’s guess. Is it just the number of accounts created in the past ten years? Or is it active accounts?

I did notice a couple of factual errors in their timeline, however. They claim the Kobo Aura H2O was “the world’s first waterproof ereader”. If that was true then how did I review the waterproof Kindle Paperwhite from Waterfi one year earlier. Pocketbook also released a waterproof model, the Pocketbook Aqua, in early 2014 before the Aura H2O was ever announced.

Another not-quite-accurate detail is they say that OverDrive launched on “all” Kobo devices in 2018. Older Kobo devices still lack direct OverDrive integration. They’ve always supported OverDrive for library ebooks, but the built-in support is only available on the newer models even though they could easily add it to the old ones.

The post on their Facebook page says they’ll be “celebrating throughout the week” but apparently it’s just an internal celebration because they haven’t added any birthday deals and there’s no mention about it anywhere on their website aside from the timeline. But maybe they’ll add something for customers to celebrate in the coming days.