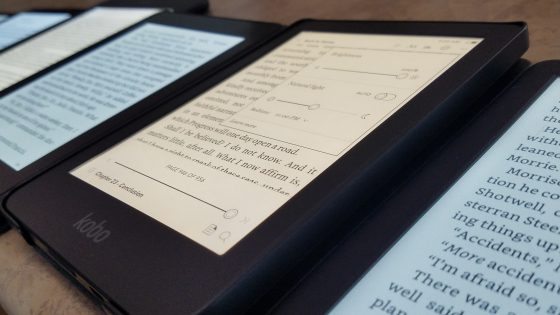 One thing that sometimes comes up in regards to dedicated ebook readers with E Ink screens is the frontlight being a touch too bright at the lowest setting to be comfortable for night reading when all the lights are turned off in the house.

Now that I’m reviewing the Pocketbook Color I’ve become aware of this problem once again. To me the light is far too bright at the lowest setting to even consider using it at night. It helps a little to use dark mode for inverted text, but Pocketbook’s native app doesn’t even support that feature—for that you have to install KOReader.

This used to be more of an issue in the early days of frontlights, but now most frontlights are dim enough at the lowest setting to read comfortably without eye strain in a dark room. But some are still brighter than others so I wanted to do a test to see which ereader has the dimmest frontlight.

People often mistakenly refer to the light as a backlight, but technically E Ink screens are opaque so they cannot have backlights. Instead they have small LED lights that are located above the screen along the edge with a light layer over the screen to help guide the light evenly over the display—that’s why they are called frontlights.

A backlit iPad at the lowest brightness setting still puts out far more light than the Pocketbook Color, so even a bright frontlight is dimmer than a typical backlit LCD screen.

I wanted to see how the Pocketbook Color compares to other ebook readers in terms of frontlight brightness, and how they compare to each other, so here’s a list of the ebook readers that I tested. It includes current models only but not all of them, just ones that I happen to have laying around. I didn’t use a lux meter or do anything scientific; I just laid them all out on a table in a completely dark room and put them in order of dimmest to brightest.

By far the Kindle Oasis 3 has the dimmest frontlight at the lowest setting. It also has the most uniform frontlight that I’ve seen on an ebook reader yet so it easily wins the best frontlight award.

The rest of the Kindle lineup and the Kobo Clara HD all have comparable frontlights at the lowest setting, although the Kobo adds a warm frontlight so it’s more versatile. Other Kobos likely fall in a similar range but I only have the Clara HD at the moment.