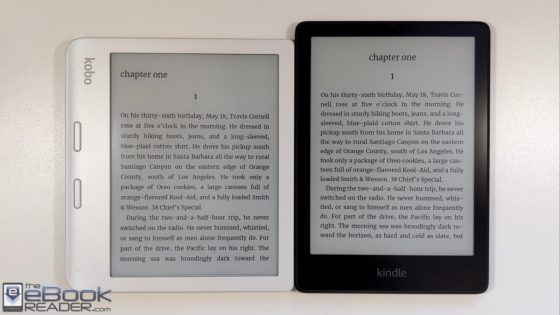 Here’s a comparison review between the new 6.8-inch Kindle Paperwhite 5 and the 7-inch Kobo Libra 2.

Both devices were released within a week of one another and both have a lot of overlapping features. Both use E Ink’s newer screens with improved contrast, both are waterproof, both have USB-C ports and Bluetooth for audiobooks, and both are priced similarly.

Each device has a few unique features the other doesn’t. The Kobo Libra 2 has a rotation sensor and page buttons; the Paperwhite has a flush front screen and it adds support for dual band WiFi, and the Signature Edition has wireless charging and auto-brightness.

I’m just going to cover the main points in this comparison because it takes too much time to cover every minor difference, so make sure to check the full reviews for more information about each device.

The Kindle Paperwhite has a 6.8-inch E Ink screen with a flush front layer and the Kobo Libra 2 has a 7-inch screen with an indented front. Both have 300 ppi.

With the frontlights turned off on both devices, the Kindle’s screen has a noticeably lighter background, whereas the Kobo has more of a darker gray tone.

With bright ambient lighting it’s hard to see a difference in the darkness of the text when comparing both devices, but in lower lighting conditions the Kobo Libra’s screen clearly looks better. Text stands out more, like it’s on top of the screen, whereas the Paperwhite seems like the text is behind the screen.

Both devices have nice evenly-lit frontlights and both have dual-colored frontlights with the option to use a cool color or a warm color or a combination of the two.

The color of the warm light looks fairly similar on both devices, but the cool colors are quite different. The Paperwhite’s frontlight has more of a neutral tone that tends to give it a more natural paper-like look.

On it’s own I like the frontlight on the Libra 2, but when compared to the Paperwhite 5 (and the larger Kobo Sage), the Libra has more of a greenish blue tone. It can be tamed with a bit of warm light added, but it never looks quite as paper-like.

The Kindle Paperwhite got some new hardware to improve performance; the Kobo Libra 2 did not, so naturally the Paperwhite has a clear advantage in the performance category.

For the most part there’s not a big speed difference with navigating the interface and turning pages, but when it comes to more demanding tasks like zooming and scrolling on PDFs and comics the Kindle is noticeably smoother.

I think the Kindle Paperwhite 5 and Kobo Libra 2 are both really good at what they do. It’s gotten to the point where both do so many of the same things well that one isn’t clearly better than the other. It basically comes down to what design you prefer and what store you’d rather buy ebooks from. There are some software differences between the two but nothing major. We’ll save that topic for a separate review.