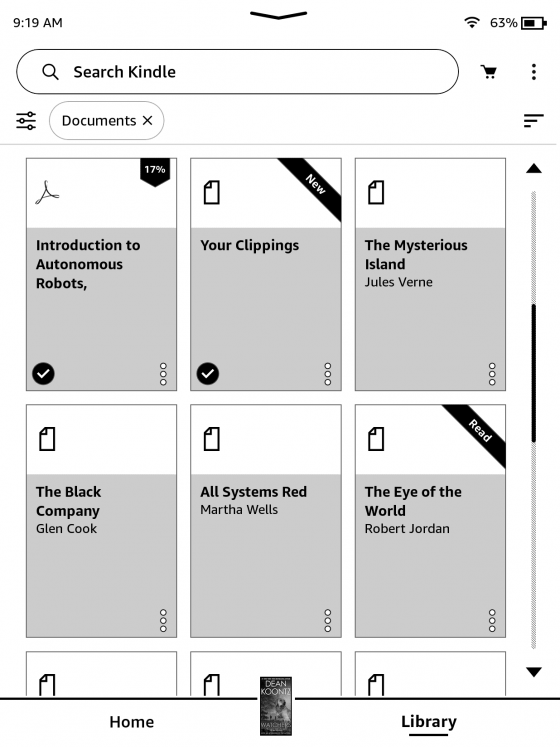 One thing I can’t figure out about Kindles is why they show covers for personal documents on the lockscreen when the Kindle is sleeping (ad-free Kindles only), but in the library and on the homepage they just show generic personal document covers with hard-to-read titles.

It makes no sense. What is the logic behind this? It’s especially annoying when those same books do show the cover in the library when using Kindle apps.

So why do the Kindle for Android and Kindle for iOS apps show covers for personal documents in the library and Kindle ereaders don’t?

Even now that Amazon has added support for emailing ePub ebooks to Kindles, they show real covers on the lockscreen when the Kindle is off, but in the library they only show generic covers.

Once you download those same ePub ebooks to a Kindle app, it will show the real cover instead of the generic cover. Why are they keeping Kindles from displaying those same covers?

The new layout on Kindles looks really ugly with the generic personal document covers. They’re all put worthless in the new list view because the writing is so small you can barely read them. Then in grid view you only see the ugly covers and nothing else. It’s a total eyesore when viewing personal documents.

Amazon clearly has a way to show book covers for personal documents on Kindles, so why are they showing generic covers instead? The fact that they do show the covers on Kindle apps makes the situation even stranger. I just don’t get it. They keep messing with the user interface and changing a bunch of stuff around, but they can’t bother to make one usability change to show the covers for sideloaded books? Whatever…