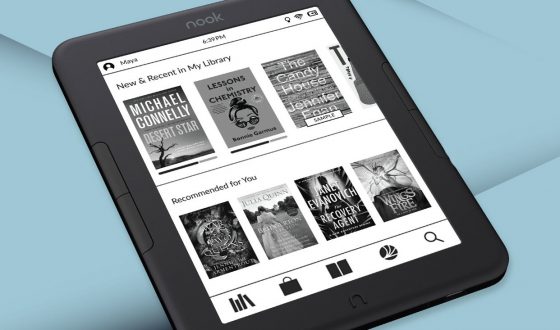 It’s basically a trimmed-down version of the Nook Glowlight 4 that was released last year. It has a lower resolution screen, no warm light, and it has 8GB of storage (5GB usable) instead of 32GB.

Otherwise it appears to be the same. The overall design is unchanged, with page buttons on both sides of the screen, and it has a USB-C port as well.

The Nook Glowlight 4e has a 212 ppi E Ink screen instead of a 300 ppi screen like the Glowlight 4, and it lacks Night Mode, meaning it doesn’t have a frontlight with adjustable color temperature, just the default color.

Barnes and Noble is selling the Nook Glowlight 4e for $119.99. That’s $30 less than the regular Glowlight 4. It’s available to pre-order now and is getting released on June 7th.

What do you think of the new Nook? B&N’s approach is definitely a bit different. It’s been over 3 years since Amazon last released a new 6-inch Kindle, and Kobo is still holding onto the 6-inch Kobo Clara HD from nearly 4 years ago, and yet B&N has released two 6-inch Nooks in the past 5 months. With color E Ink screens being the new thing, along with larger devices capable of notetaking, B&N is keeping things simple with the Glowlight 4e.

On a side note, it looks like the larger Nook Glowlight Plus with a 7.8-inch screen might have been phased out. It’s no longer available to purchase new, just refurbished, and it isn’t mentioned at the bottom of the press release alongside B&N’s other devices.