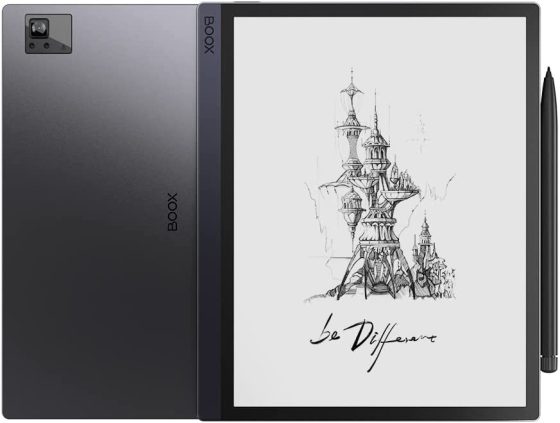 Here’s something a bit unexpected. Onyx has listed a new Boox Tab X with a 13.3-inch E Ink screen on Amazon.

The weird thing is they haven’t announced it yet, and there isn’t any information about it on their website. They’re probably going to make an official announcement soon, and I’ll update this post when that happens, but for the time being it’s kind of a mystery device, and there’s very little information provided on the product page.

Update: Onyx has officially released the Boox Tab X. Hit the link for the updated post with the full list of specs and an unboxing video, and the picture above was indeed a placeholder and is the Tab Ultra, not the Tab X.

From the picture, it looks just like the new 10.3-inch Tab Ultra that was released last month. In fact it appears to be the exact same image so maybe it’s just a placeholder.

I would be surprised if the Tab X has an asymmetrical design as pictured like the Tab Ultra since Onyx’s 13.3-inch models use flexible E Ink screens, where the larger section is always at the bottom instead of the side.

The Boox Tab X is probably just a larger version of the Tab Ultra. But I guess we’ll have to wait for Onyx to make an announcement before we know for certain.

The Boox Tab X is priced at $879.99 like the Max Lumi2, which is Onyx’s current 13.3-inch device. But it was released about a year ago so that means it’s time for it to get replaced, as Onyx rarely keeps models around for longer than a year.

It’s a bit odd to see a new device available to purchase before it gets announced but that’s currently the case with the 13.3-inch Onyx Boox Tab X. I’ll update this post with some specs after it gets announced. It’ll probably be 90% the same as the Max Lumi2, but with a dedicated GPU to improve the E Ink refresh rate like the Tab Ultra, and it’ll probably have a 16MP rear camera too.