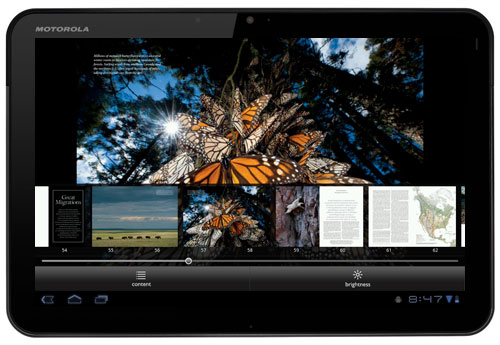 Barnes and Noble has released an update for the Nook Android app designed to add support for 7-inch and larger tablets with Android 2.1 and up. The update adds newspaper and magazine subscriptions for tablets, and comes with a new tablet-optimized layout.

I decided now was a good time to put together a review and video review of the Nook Android app, showing how the app works, the ebook features, the in-app store, newspapers and magazines, and everything in between.

The video review demonstrates the Nook Android App on the Motorola XOOM, which Barnes and Noble specifically mention as a supported device, along with Honeycomb tablets in general, the Samsung Galaxy Tab, Archos tablets, and pretty much any 7″ or larger tablet with Android 2.1 or higher and with a 800 x 480 resolution display or higher.

According to Barnes and Noble, the update provides access to 140 newspapers and magazines. B&N boasts that to be the largest digital newsstand offering for Android. I checked and Amazon has about 120 with their new tablet-specific app that launched in April, which I also reviewed on the XOOM.

At first I didn’t think B&N had anywhere near 140 available, in fact there are only 19 newspapers at the time of this review, but there is a very long list of magazines. One thing that is confusing is when you scroll to the bottom of the magazine page it stops and shows the blue line that universally means the scrolling has ended, but then without any indication more titles will load below the line after a few seconds.

Overall, B&N did a good job with the update. In some instances the app is slow and laggy on Honeycomb—while scrolling through the library for instance—and other times it is quite fast, like when navigating through ebooks, newspapers, and magazines.

Newspaper and magazine navigation is much faster and smoother than with the Kindle Android app, although the Kindle App has a better newspaper layout for Honeycomb tablets and more newspapers. The Nook App has a nicer layout for magazines, and has “ArticleView” like the Nook Color. The app does not yet support Nook Kids ebooks.

I also tried out the new update on a smaller 7″ tablet to see how things work, the Nook Color with CM7 to be specific. Pretty much everything was the same as with the version on Honeycomb with the 10″ XOOM. The only difference I noticed was that the Nook Color did not break down newspaper articles into two columns in portrait mode.

The Nook Android App can be downloaded from the Android Market, V CAST Apps from Verizon Wireless, Samsung Apps, GetJar, and AppsLib, with others to come.