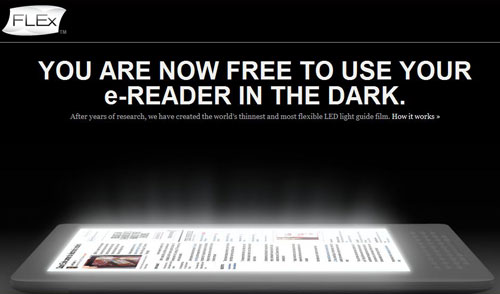 A reader tipped me a few weeks back about this Flex Lighting website that advertises a new type of lighting technology designed for ebook readers with reflective displays such as E Ink.

One of the shortfalls of E Ink ebook readers like the Kindle and Nook is that they can’t be used at night or in low-lighting conditions without an external source of light because they emit no light themselves. They require a lamp or reading light just like paper books.

Flex Lighting aims to change that with their new front light LED film. The lighting film goes on over the top of the screen during the manufacturing process, and can be as thin as 50 microns. It is supposedly invisible, even at angles, and works with touchscreens too.

When turned on the film produces a soft, uniform glow that draws minimal power because of the efficiency of LEDs and the fact that only 1-2 LEDs are required for a 6″ screen. It works with both color and monochrome displays. This could be the edge that color E Ink needs to become more popular.

I exchanged a few emails with the president of Flex Lighting, Mike Casper, and he says they have working prototypes, but they can’t release any pictures of them just yet. He was able to send over a fact sheet about Flex front lighting film. I thought about summarizing it but I didn’t want to leave anything out so here it is below:

What is FLEx’s front light?

ABOUT FLEX LIGHTING: www.flexlighting.com
Founded in 2004, Chicago-based FLEx Lighting has pushed the limits in pursuit of the world’s thinnest lighting systems using LEDs and thin film. With immediate uses in consumer electronic displays and signage, the FLEx ultra-thin and transparent illuminated film can be customized for a wide range of applications. Years of light guide research and development has helped FLEx build an international patent portfolio that is ever expanding as the company continues to pursue the frontier of illuminated films. With continuous research and development efforts and a network of contract manufacturers, FLEx is incorporating the use of this technology to the e-reader devices of the future.

If everything works like they say it does, Flex Lighting could be huge. A completely invisible layer over the screen that emits light when needed is exactly what ebook readers need, as long as the film layer doesn’t create extra glare or touchscreen problems.

Hopefully Flex Lighting can get their product incorporated into some ebook readers in the near future. It certainly looks promising, especially for color E Ink screens.