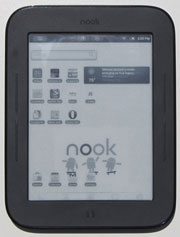 For those of you waiting for an easy rooting method for the Nook Touch with the new 1.1 firmware, today is your lucky day. This new rooting method, called SalsichaNooter, is just like the old Touchnooter, so it only takes a few minutes to complete and doesn’t require any complicated steps.

I tested it out last night and it works great. The rooting package includes the Android Market and Google Apps, as well as something called Nook Touch Tools and Jars, which allows you to re-map the Nook’s page buttons, the “n” button, and the on-screen B&N buttons.

The SalsichaNooter rooting package hails from this thread at the XDA forums. It was put together by salsichad2, who deserves a ton of credit for making it easy for us non-developers.

1. (Optional) Make a backup copy of your Nook Touch before rooting so it can be restored back to 100% normal at a later date. If you are too lazy or forgot to make a backup, you can use this restore method instead. Apparently it doesn’t restore 100% percent exactly pre-root but I’ve used it successfully with no noticeable difference.

2. Power off the Nook Touch.

3. Download the latest version of SalsichaNooter to your computer and unzip it with a program such as WinRAR. Update: the download links at XDA no longer work so here’s a SalsichaNooter mirror download.

4. Write the SalsichaNooter image to a microSD card with an external microSD card reader if your computer doesn’t have one built in. For Windows, use WinImage or Win32DiskImager to write the image to a card. For WinImage, open as Administrator, then go to Disk, then “Restore Virtual Hard Disk on Physical Drive”. Hit okay, then choose the SalsichaNooter image, and wait for it to finish.

5. Insert the SalsichaNooter microSD card into the Nook Touch and then turn the device on. Let it do its work for a few minutes and is should eventually load and ask to choose a launcher. At this point, remove the microSD card and reboot the Nook. My attempt didn’t make it to the launcher; it just kept loading at the Nook start-up screen for about 5 minutes. I removed the card and rebooted it and it worked just the same.

6. From the Android homescreen, open the app drawer (furthest icon to the left at the bottom of the screen). Open Nook Color Tools and un-check allow non-market apps and then re-check it again.

7. From the app drawer, open the YouTube app and select “My Channel” and login to your Gmail account.

8. After logging into YouTube, open the Gmail app and hit sync.

9. Launch the Android Market and install at least one app. Search doesn’t work so you have to select a category.

10. After installing an app from the Android Market, you can get search to work by installing this Vending.apk. I downloaded it to my computer, re-formatted the SalsichaNooter microSD card back to normal and placed the Vending.apk on to it, and then inserted the card into the Nook Touch and used the File Explorer to open the app. Enjoy!

Check out the Nook Touch Working Apps List for some ideas on what apps to install.

Update: I’ve noticed the Shop button no longer works after pressing the “n” button, but you can still get to the B&N store by tapping the “see all B&N Top 100” link from the Homescreen.