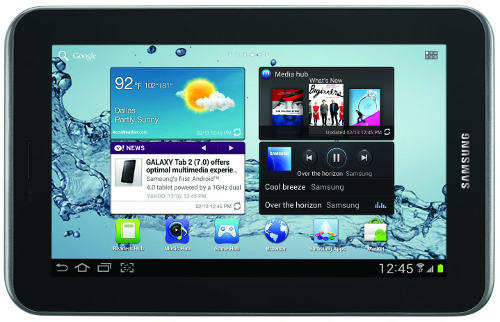 Samsung has released a new edition to their line of 7″ tablets, the Galaxy Tab 2. It is somewhat of a downgrade from the earlier model hardware-wise, but is still one of the better mid-range tablets for the price, especially since it comes with Android 4.0 and has full access to the Google Play Store for apps and content.

The Samsung Galaxy Tab 2 will be released on April 22nd. Right now it is up for pre-order on Amazon for $249. That’s a good price for the features it offers, but it’s too bad Samsung couldn’t shave an extra $50 off to make it the same price as the Kindle Fire and 8GB Nook Tablet—it would be the obvious winner at that price.

Even at $249, it is a better deal than the 16GB Nook Tablet and a number of off-brand tablets. But in a couple of months there might be an even better deal for Google’s and/or Asus’s rumored 7″ Ice Cream Sandwich tablets. It’s going to be an interesting summer for tablets.

Here’s a rundown on the Galaxy Tab 2’s specs:

In addition to the usual Google apps, the Samsung Galaxy Tab 2 comes with a number of apps pre-installed, including Kindle, Netflix, Polaris Office, Dropbox (plus you get 50GB free storage space for a year), and Samsung’s apps and TouchWiz widgets.