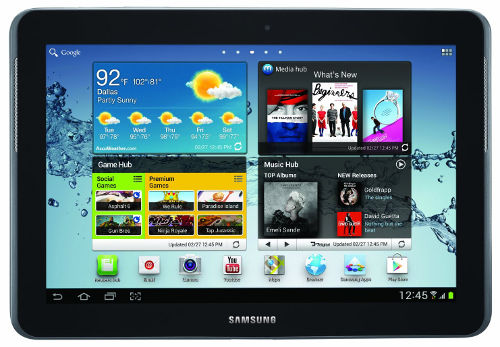 Both show a new direction for Samsung’s tablets. The focus seems to be mainly on lowering the price. The 7″ Galaxy Tab 2 is a downgrade from the previous model in some ways and the 10″ Galaxy Tab 2 has pretty much the exact same specs as last year’s model.

Aside from the slight cosmetic changes, the only “upgrades” are the addition of a microSD card slot and the Android 4.0 operating system (apparently Samsung still hasn’t updated the original to Ice Cream Sandwich).

So why would anyone buy the 10″ Galaxy Tab 2, you ask? I don’t know. I wouldn’t. I had planned on buying the 10″ Galaxy Tab 2 because I have yet to review any of Samsung’s tablets, and since they are among the best, I thought now would be a good time. I had it in my cart at Amazon and was just about to hit the “place order” button when I decided to review the specs first.

That was a good idea because there’s no way I’m paying $400 for a tablet with last year’s specs and no HDMI port. What is Samsung thinking?

The new Asus Transformer TF300 is a much better value at the same price with its quad-core processor, mini HDMI port, IPS display, and optional keyboard dock. Plus it comes with double the storage space (16GB vs 32GB) and a better rear-facing camera (3MP vs 8MP).

Nonetheless, for those that want to get the new 10″ Galaxy Tab 2, it is up for pre-order from several retailers for $399, including Amazon. The release date is set for May 13th.

Personally, I think I’ll wait for the Galaxy Note 10.1. But then again that could be mighty expensive. The 7″ Galaxy Tab 2 for $249 is tempting…