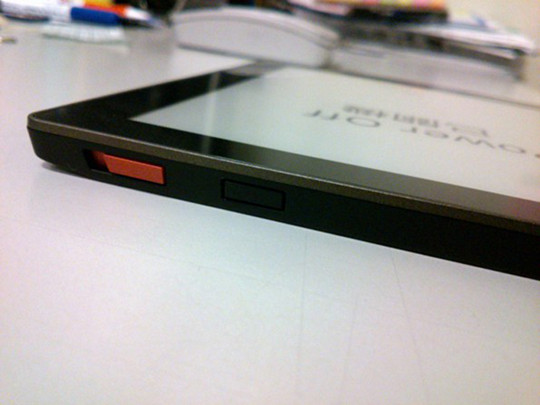 I’ve been keeping an eye on things over on E Ink’s website for anything new ever since they stated in a recent interview that they would be releasing a new generation of ebook reader screens soon that are capable of going up to 100 page turns without needing to do a full page refresh, just partial refresh.

While I haven’t seen anything new about that yet, I did notice something that suggests ebook readers could be transitioning from using infrared touchscreens to capacitive touchscreens. In fact Amazon has already done just that. The Kindle Touch was the only E Ink Kindle to ever use an infrared touchscreen; with the Paperwhite Amazon switched over to a capacitive screen.

That change may be coming to other brands of ebook readers too. Over on E Ink’s website they have a list of all the screen types available for ereaders using Pearl display modules. What’s interesting is that none of the screens listed suggest infrared touchscreens as an option. But capacitive is listed as a built-in option, meaning E Ink ships them with the capacitive layer already applied.

E Ink didn’t used to have that option in the past. Their website states that “Capacitive touch technology utilizes finger swipes, and is placed on top of the display module. E Ink’s touch solutions will not affect the reflectivity of the display.”

This isn’t anything new; E Ink has had that listed on their website all year. But no new major ebook readers have been released yet this year except the Kobo Aura HD, and it has a special screen size that’s not even listed as an option at E Ink, so it’s more of an anomaly.

I have a feeling that this year’s ebook readers will feature capacitive screens instead of infrared. The leaked images of the new Sony PRS-T3 and new Kobo eReader appear to have a screen that is less recessed than earlier models. There is a picture of the new Kobo from an extreme angle (shown above) of the front and the material looks very thin. With infrared touchscreens there needs to be enough space to add the infrared sensors, and it certainly doesn’t appear to have that on the new Kobo.

From a usability standpoint, it doesn’t really make much difference so the transition shouldn’t be a big deal. The Kindle Paperwhite’s capacitive touchscreen works well and doesn’t appear to have a negative impact on screen clarity like the old capacitive screens Sony used to use that were highly reflective.