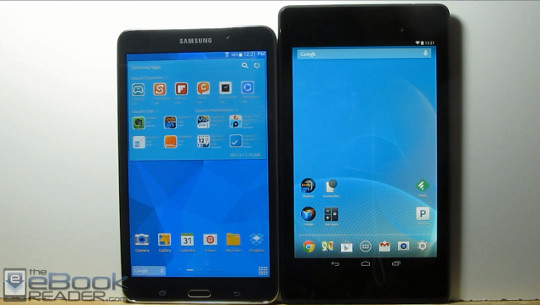 Last week I posted a review of the new 7-inch Samsung Galaxy Tab 4. One of its main competitors is the 2nd gen Nexus 7, so I wanted to put together this comparison review outlining the similarities and advantages for each.

Both are very similar yet very different Android tablets. The Nexus 7 has some hardware advantages. The screen being one of them, with over 100 more pixels per inch. I’ve already written about the Galaxy Tab 4 screen being better than I’d expected despite the lower resolution, but side-by-side with the Nexus 7 it’s clear which one wins. In the video review below the extra brightness on the Nexus 7 really stands out. Both are set to at maximum.

Check out my full reviews of the Samsung Galaxy Tab 4 and Google Nexus 7 for more detailed information about each tablet and for a full list of specs.