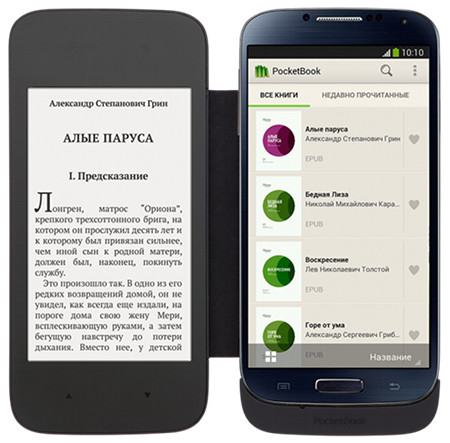 E Ink has been trying to crack the smartphone market for the past few years with their low-power outdoor readable epaper displays. Yesterday the Onyx Midia InkPhone went up for pre-order—it’s a new phone that uses an E Ink screen instead of LCD.

Other products are using E Ink screens as secondary displays for smartphones. The PocketBook CoverReader is one of the first such devices to hit the market.

The PocketBook CoverReader is a specially designed case for the Samsung Galaxy S4 that has a 4.3-inch E Ink screen on the inside of the cover. The case snaps onto the back of the Galaxy S4 and connects to the USB port to transfer text and images from the LCD screen over to the E Ink screen.

By using the “Share” feature within certain Android apps you can view ebooks and text documents using PocketBook’s reading app, along with emails, web articles, and images.

The PocketBook CoverReader sells for 3490 rubles in Russia from PocketBook’s website. That equates to just over $100 US dollars.