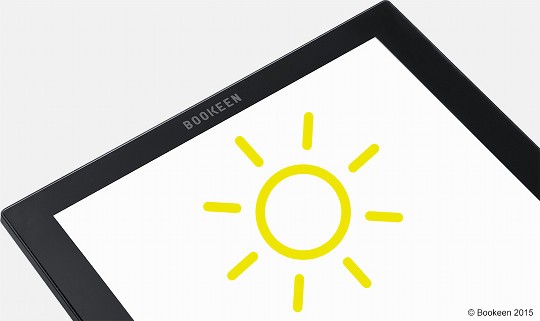 Bookeen, a small ebook reader company based in Paris, has announced that they intend to bring solar charging to ebook readers through a new partnership with Sunpartner Technologies, also based in France.

The press release is slim on details, and doesn’t specify whether the technology will be used on Bookeen’s line of Cybook ereaders exclusively or if will be sold to other manufacturers as well.

Either way, the solar-powered “product” is scheduled to hit the market in 2016, but if Bookeen’s past release dates are any indication it could end up being closer to 2018.

The solar technology uses “Wysips®”, a thin invisible photovoltaic layer of glass that is designed to seamlessly integrate into any surface to transform it into a solar panel. This invisible layer can recharge an ereader’s batteries using light energy, both natural and artificial.

Solar power is indeed an interesting concept when it comes to mobile devices. But you’ve got to question the absolute necessity of it when it comes to E Ink ebook readers. Solar charging seems like it would be much more suited for devices like phones and tablets that need frequent charging.

When it comes to E Ink ebook readers, battery life is usually measured in weeks, not hours. Some ebook readers, like the Kindle Paperwhite, are advertised as being able to go 8 weeks per charge, which is totally unrealistic for most users, but it’s not impossible.

Two to four weeks of battery life is more typical for most ereaders. So if the device only needs to be charged 12-24 times per year for 2-4 hours per charge, it’s only going to save a few pennies worth of electricity by using solar power instead. And the cost of manufacturing and applying the technology would far outweigh any actual energy-savings over the relatively short lifespan of an ebook reader.

Solar charging is one of those things that sounds like a cool idea but is it really practical when you only need to charge an ebook reader once or twice a month? It seems like the technology would be better suited for high-energy consumption devices rather than E Ink.

That being said, it would be pretty neat to have an ebook reader that you never had to plug into a charger.