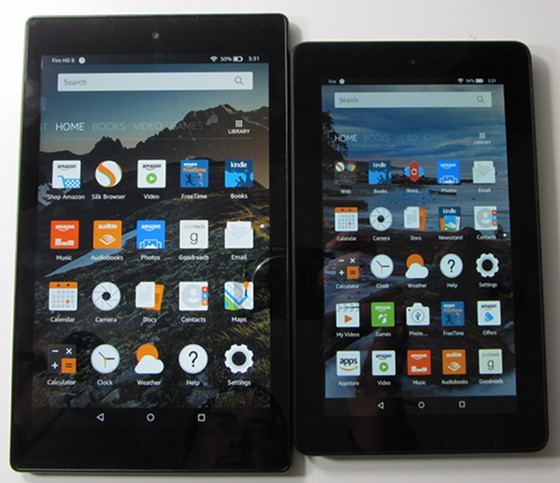 Amazon has released three new tablets for 2015. There’s the $49 Fire tablet, and the Fire HD 8 and Fire HD 10. The latter two share the exact same specs; the only difference is the screen size.

For this review I’m going to compare the $49 Fire tablet with the Fire HD 8.

The most obvious difference between the two is the size, but there are other hardware differences as well.

From a software standpoint, both tablets are nearly identical and have almost all the same features. The main two differences are the HD models add support for Firefly and display mirroring.

The $49 Fire does not have those two features. It can only connect to a TV or monitor using Amazon’s second screen feature, which is limited to Amazon videos and they can only be streamed to Fire TV devices.

When the new Fire tablets were first released, I was wondering why anyone would spend $100 more to get the Fire HD 8 instead of the $49 Fire. After all, you can get three entry-level Fire tablets for the same price as one Fire HD 8.

Once I got both tablets in hand, I could see why people would want the Fire HD 8 instead. Its design is much sexier and it has a nice premium quality feel to it, whereas the $49 Fire clearly feels like cheap a budget tablet.

The two main things that are better on the Fire HD 8 are the screen and the sound. It has two speakers on the edges that project sound loudly, whereas the basic Fire has just one speaker on the back that is easily muffled.

There’s not a big difference in ppi (pixels-per-inch) between the two tablets (189 for the HD 8 and 171 for the Fire), but the overall quality of the screen on the Fire HD 8 is much better. Colors are brighter, viewing angles are wider, text is clearer, and it just looks a lot better side-by-side. 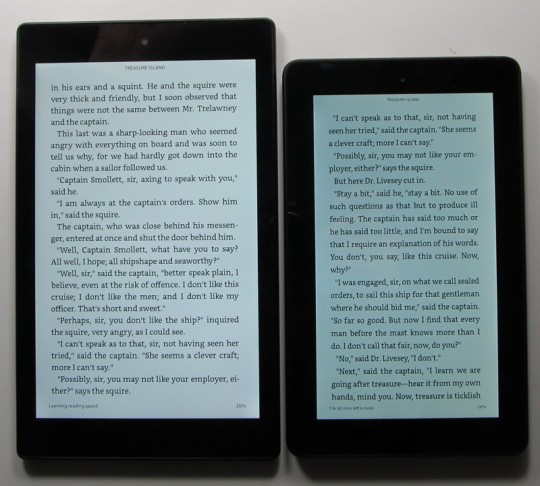 As far as hardware, the Fire HD 8 has a slightly faster processor (1.5 GHz vs 1.3 Ghz), it has upgraded front and rear cameras, and it has dual band WiFi instead of single band. The HD models also have the option for 8GB or 16GB of storage space, whereas the $49 Fire has 8GB. Both have microSD card slots for up to 128GB.

The overall weight happens to be identical between the two tablets at 11 ounces even though the Fire HD 8 is larger in size. The Fire HD is quite a bit thinner at 7.7mm (versus 10.6mm).

A couple other differences, the Fire HD 8 has a gyroscope sensor (the $49 Fire does not) and it comes in a variety of colors: Black, Magenta, Blue, and Tangerine (just black for the basic Fire).

When it comes to comparing the $49 Fire and the Fire HD 8, I think of it this way: the $49 Fire tablet is good for gifting and it makes for a nice secondary or beginner tablet; the Fire HD 8 is the kind of tablet you’d be more apt to use everyday as your main tablet.