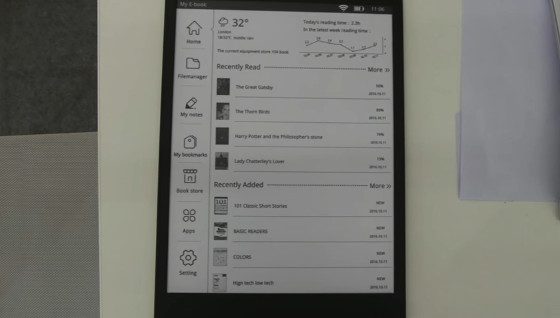 Just because Amazon refuses to release a new Kindle with anything but a 6-inch E Ink screen doesn’t mean that there aren’t any other options for large screen ereaders out there.

There still aren’t a lot of choices but there are more larger ereaders available than there used to be so at least there’s been some progress.

Sony discontinued their 13.3-inch DPT-S1 PDF reader a few months ago so unfortunately it’s no longer a viable option.

But Onyx does have the Onyx Boox Max with a 13.3-inch screen to pick up the slack.

There are some other large-screen ereaders expected to get released in 2017 as well, like the 10.3-inch Boyue T103 and the reMarkable E Ink tablet, but they aren’t on this list because they haven’t been released yet.

Here’s a roundup of large E Ink ereaders that are currently available to start 2017.

Kobo Aura One – Kobo’s latest ereader breaks the trend of 6-inch screens with a really nice 7.8-inch 300 ppi E Ink screen that has a frontlight with variable color tones. In my opinion the Aura One was the best ereader released in 2016. The larger screen is great and the overall design is quite nice too.

InkBook 8 – This is the least expensive ereader with a larger 8-inch screen. It runs Android 4.2 and has a memory card slot and frontlight so it’s a good overall value but it has a lower resolution screen than the other 8-inch models on this list.

Onyx Boox Max – This is Onyx’s largest ereader with 13.3-inch E Ink screen. It’s not a typical E Ink screen made from glass; it has a flexible plastic screen that’s a lot lighter and more durable than regular screens.

Onyx Boox N96 – This is Onyx’s newer 9.7-inch ereader that replaces the M96. There are two models of the N96 available. One has a frontlight, the N96ML, and the other has a finger-friendly touchscreen instead. Both have a touchscreen that works with a stylus.

Onyx Boox i86 – An 8-inch model from Onyx with a frontlight and 250 ppi E Ink screen. It runs Android 4.0 like the other Onyx models. It’s more expensive than the 8-inch Kobo Aura One but it has a couple of advantages like the memory card slot, page buttons and audio support, but the Kobo has a better screen and is waterproof.

Pocketbook InkPad 2 – Toward the end of 2016 Pocketbook released an updated 2nd gen model of their 8-inch InkPad. However, Pocketbook seriously lacks distributors so about the only place to get one is on eBay imported from Israel.

Kindle DX – Amazon stopped making the 9.7-inch Kindle DX several years ago. Now they can only be purchased used and the hardware and software are majorly outdated, but it’s still the only viable option for a larger Kindle (thank Amazon for the lack of choices).