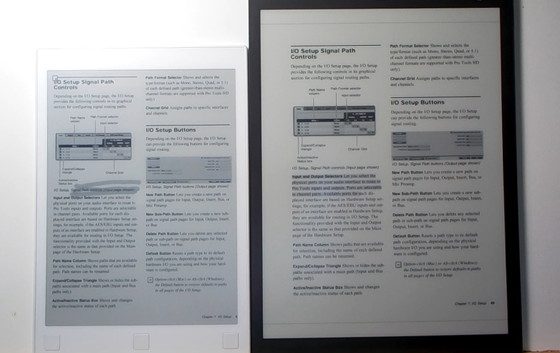 The Sony DPT-RP1 and the reMarkable paper tablet are two new E Ink ereaders with a similar set of features.

Both have large E Ink displays and come with a stylus pen for writing on the screen, and both are marketed as paper replacement devices.

They double as ereaders and digital notepads, unlike other ebook readers such as Kindles and Kobos that focus on reading only.

The reMarkable is geared toward drawing and sketching more than the Sony, but there’s plenty of crossover between the two.

Both devices are somewhat lacking when it comes to ereading features. Neither have common things like a dictionary, table of contents, or bookmarks, but the Sony does have a bit more to offer at this point.

One thing to note about the video review, I showed how the reMarkable has the ability to move notes and drawings around the screen, but the Sony has that feature as well (somehow I just never noticed it before). One difference is the Sony can’t re-size selections, just move and cut.

The writing and drawing features on the reMarkable are about 100x more capable than the Sony. The reMarkable’s stylus supports 2048 levels of pressure sensitivity and 512 levels of tilt. The Sony basically supports 1 level of pressure and 0 tilt.

Writing on the reMarkable is more responsive than the Sony because there’s virtually no noticeable lag when writing. The Sony has a little bit of delay when writing so it takes some getting used to. Another advantage for the reMarkable is the stylus doesn’t require charging like the Sony’s.

The reMarkable is aimed more at drawing and sketching than the Sony. It has several different writing styles with various pens and pencils to choose from and it offers things like shading, layers, and undo/redo. You definitely wouldn’t want to use the Sony DPT-RP1 for any kind of advanced drawings because you can only delete full pen stokes and it’s way too easy to delete extra lines with no layers or option to undo.

The reMarkable has a handy crop feature that can sometimes enlarge a PDF to nearly the same size as it is on the Sony’s screen, depending on individual files and how big the margins are (the Sony doesn’t have cropping).

The reMarkable has a nicer homescreen because the Sony doesn’t really have one at all, just a long list of files and folders on your device. The reMarkable has different sections for ebooks, documents, notes, and bookmarked files—it makes it easier to organize and find things.

It has physical buttons to turn pages.

The reMarkable comes with way more notes templates than the Sony.

There’s a LiveView feature to mirror the device’s screen on your computer using an app (still in beta).

The reMarkable has a go-to-page option; the Sony just has a page dial that’s not nearly as accurate if you’re trying to find a specific page (although search can work well sometimes, depending on how often the page number appears).

These features aren’t finalized yet but the reMarkable team plans to add USB transfers and mobile applications to add files, whereas the Sony only has a desktop app.

The Sony has a larger display with its 13.3-inch E Ink Carta screen. The reMarkable has a 10.3-inch screen that’s partially E Ink Carta. Whatever that partially means it gives the reMarkable a slightly darker and grayer screen, whereas the Sony’s has more of a lighter creamy color. Between the larger size and the lighter background, there’s no question the Sony’s screen looks better.

Overall the Sony DPT-RP1 has a nicer, more premium design. It’s a lot thinner and just feels completely different than a tablet or ereader. The reMarkable’s build quality is solid but it has a more typical design and feels like a regular 10″ tablet. To put the design in perspective, both devices weigh the exact same despite the Sony being much larger.

On the software side, the Sony has a better reading app with more features. It supports two page view where you can view two different documents at once, or one document with a separate notes file, and there’s two-page spread to view two pages at a time in landscape mode. The DPT-RP1 also has text search and mark search, and there are lists showing all your added notes and highlights. Tapping embedded links works on the Sony as well.

I find that adding highlights is easier on the Sony because it automatically grabs the text whereas the reMarkable uses freehand highlighting, which is more time-consuming and easier to go off-track.

The Sony has an advantage when it comes to the processor and RAM. It has a quad-core 1.2GHz CPU with 2GB or RAM and the reMarkable has a single-core 1GHz CPU and 512 MB of RAM. The Sony also offers more storage space (about 11GB usable to the reMarkable’s 7GB).

Page turns are about the same speed but using large PDFs and the thumbnail view are noticeably faster on the Sony. The reMarkable is pretty responsive considering the CPU and RAM, but it tends to get bogged down with thumbnail view. Some of the images don’t load and when turning pages quickly it sometimes takes a couple seconds to load a page.

The Sony adds a couple extra hardware features, including NFC unlock and Bluetooth support for transferring files. Plus the capacitive touchscreen supports finger page-turning and the pinch-zooming gesture to view multiple pages at once.

Battery life seems better on the Sony but it’s hard to tell at this point (need more time to test the reMarkable).

The reMarkable sells from the reMarkable website for $599, and the Sony DPT-RP1 sells for $699 from Amazon and B&H.

The price of devices with large E Ink screens is still a lot higher than smaller ereaders and tablets, so both devices can reasonably be considered overpriced, but I can’t help but think it was a mistake to price the reMarkable so close to the Sony. The 3″ larger screen alone is worth an extra $100. Then there’s the fact that 9.7-inch E Ink ereaders like the Onyx Boox N96 can be purchased for a lot cheaper than the reMarkable—the newer Carta+ model is $349 at Amazon. It seems hard to justify the $599 price unless sketching and drawing is more important to you than ereading.