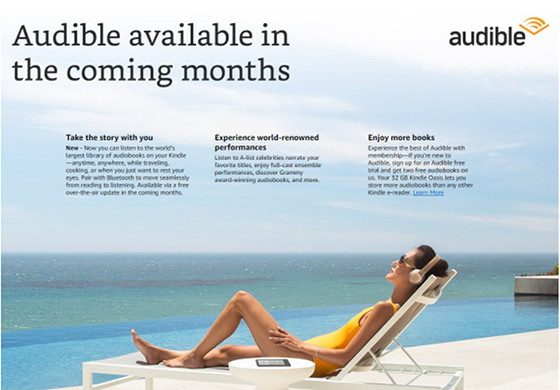 Today I happened to notice that Amazon is now advertising “built-in” Audible support on the product page for the entry-level $79 Kindle.

It’s funny how they chose to use the words built-in when it’s clearly not “built-in” yet because the statement is followed by a disclaimer saying Audible access will be added via a free software update in the coming months.

That makes it sound like it’s a ways off yet, probably not until early 2018.

They aren’t advertising Audible access on any of the other Kindle pages, other than the new Kindle Oasis, of course.

The $79 Kindle has Bluetooth built-in so apparently that’s the main reason it’s getting Audible support and the other aren’t, even though the Kindle audio adapter could easily bring Audible access to the other models as well.

Amazon stated in the press release for the new Oasis that they’d be adding Audible support to the first gen Kindle Oasis too but there’s no mention of that yet on its product page. It doesn’t officially have Bluetooth but there’s speculation that it has a Bluetooth antenna that’s just not being used. Perhaps they’ll activate it with an update.

I find it somewhat interesting that Amazon has chosen to add Audible support to the entry-level Kindle at all considering that it’s the least suited for the job. It has the smallest battery of all the Kindles and it only has about 3GB of usable storage space.

Amazon claims that’s enough space to hold about a dozen average-sized audiobooks, which is more than I would’ve expected.

But I question if the battery life is even long enough to finish one audiobook without needing to be recharged. I couldn’t find the battery specs anywhere for the 8th gen Kindle, but according to iFixit’s teardown of the 7th gen model with the same estimated battery life, it only has an 890 mAh battery. Streaming audiobooks over Bluetooth and downloading over Wi-Fi is going to drain a battery that small pretty fast.

To put that in perspective, a number of smartphones have 2500 mAh batteries or larger these days. You can even get a cheap Doogee X10 phone for about $50 with a 3360 mAh battery that’s capable of streaming audiobooks for many hours longer than the Kindle.

I suppose the $79 Kindle would be good for occasional audiobook use on the go and such, but there are certainly better and less expensive options out there when it comes to consuming audiobooks.